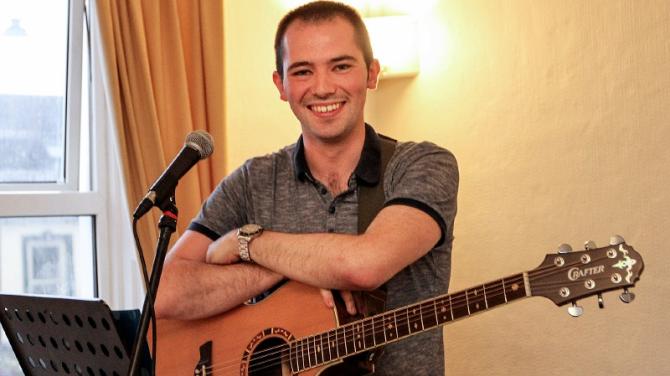 LAST Friday evening, crowds gathered at the Alexander Arms Hotel to show their support for a young Limavady lad who is set for Nebraska, USA, to continue his vocation of becoming a priest.

With his impressive guitar skills and angelic voice, inspirational Conan McGonagle, 24, entertained an audience of proud family and friends who attended the recent fundraiser in support of his journey into the priesthood.

Having already completed his studies at Maynooth National Seminary and a Masters at University in Warrington,

Conan will now travel to the Fraternity of St Peter in Denton, Nebraska, on September 3 where he will continue his training for the Catholic priesthood.

Following the event, which proved a huge success, Conan spoke to the Northern Constitution saying: “It was a brilliant night and I was deeply touched by the amazing support of the town.

“The processes of the fundraiser will go towards the annual fee of my formation and towards travel expenses.

“Myself and my family thought it would be nice to create a fundraising event which could be organised every year and which gave back something to those who were good enough to contribute, with live music by myself (the quality of which I'm not in the position to judge) and a few pieces by my niece Charlotte Allen.

“The evening was followed by a light supper with ample amounts of cake and tray bakes.

“There was also a raffle with around twenty prizes donated by the likes of Newtoun Bar, McAtamney's, Marshall Howe, Spar, Pet R Us, M&S jewellery and many more.”

According to delighted Conan, who is a former pupil of St Mary's Limavady, the generosity and support he has received over the past few weeks has been overwhelming.

He concluded: “Myself and my family would like to thank everyone who attended, everyone who contributed to the night and all who have supported me in recent weeks for their incredible generosity.

“Furthermore I recommend myself to the town's prayers as I make this new journey across the ocean and continue my training for the Catholic Priesthood.”