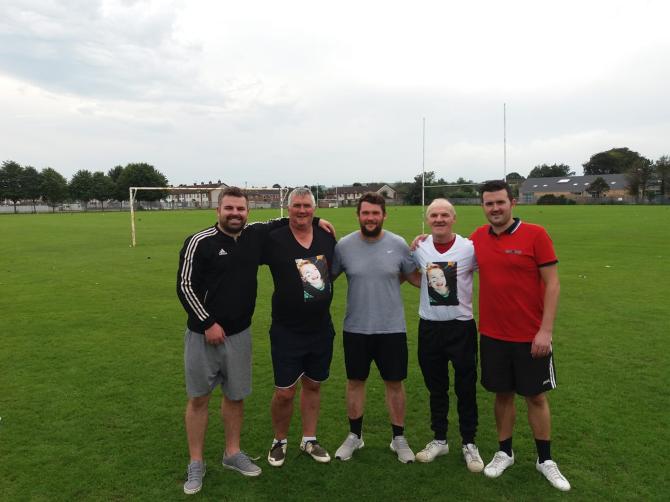 ON Saturday August 24, devoted family members and friends gathered in memory of Limavady boy Callum Logue, to participate in a football charity match with all proceeds going towards the NI Children's Hospice.
The event took place at St Mary's Football pitch in tribute to the precious five year old, who passed away on New Years Eve in 2014 after battling a debilitating illness.
Ever since his passing, Callum's dedicated family have organised a variety of events each year to honour the little youngster's memory and also to raise funds for a charity close to their hearts.
Last Saturday was no different as family and friends sported football tops including hand-made t-shirts that displayed little Callum's picture, proudly worn by his two grandfathers.
Speaking after the charity match, Callum's uncle, Michael Logue told the Northern Constitution: “It was a great day getting to play with friends and family and everyone had a good laugh which is the main reason why these events are so successful.”
He continued: “The total we have raised this summer to date is £2500.
“This includes the football match, the cricket day and an online donation link set up on Kenny’s Facebook Page.”
According to Michael, part of the total raised will be donated to ButterCup Lodge where little Callum spent some time.
Michael continued: “Our family and Kenny Magee, Callum's grandfather, in particular run events every year in memory of Callum and in support of NI Children's Hospice.
“As a family we would urge others to support such a fantastic charity too!”
Michael concluded: “Kenny is already organising the next event which will be held at the cricket club in Ballykelly and everyone is invited to come join in and take part in the charity game.
All details will be posted on Facebook.”
Following the charity match, Callum's grandfather, Kenny extended his thanks on social media to everyone who participated saying: “Thanks to Michael Logue and Aaron Magee, John Moore and Marty King for organising a great days craic.
“Thank you to Joe Mullan for being our ref and donating his fee to the Charity.
“Thanks to all the boys for turning up and everyone that donated, bought raffle tickets.
“Thanks to Austin Thompson, Mark Dickson.
”Robert J Ewing , Ryan Magee for donating raffle prizes.
“Cant thank everybody enough for the amazing effort once again.”