Termoncanice PS are top of the class! 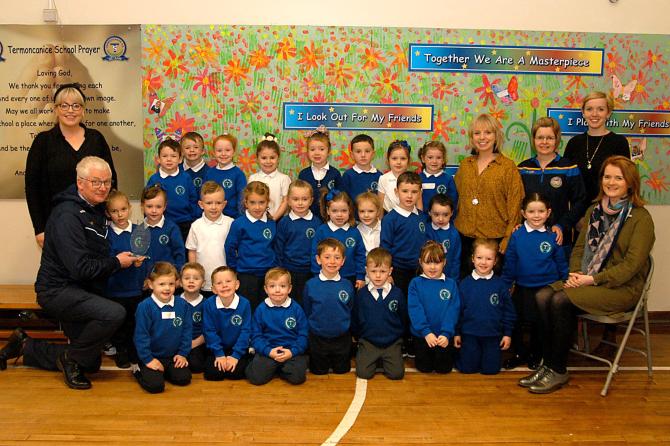 THERE was an extra spring to everyone’s step in Termoncanice Primary School last Tuesday and the smiles of the staff, parents and pupils were even wider than usual.
On the previous Saturday Night the Limavady school managed to scoop two awards at the prestigious Families First NI Awards at the Clandeboye Lodge Hotel in Bangor.
The excitement had been building since May when delighted staff, pupils and parents of the school were informed of the nomination within the 'Best Primary School' category.
Termoncanice PS night of success was rounded off when Acting Principal Leo McCloskey won the Gold Star Award for Best Principal.
Following the school's fantastic achievements, parents, grandparents and guardians of the pupils were invited for afternoon tea and a slice of celebratory cake as they picked up their little ones last Tuesday.
Speaking after the awards, Mr McCloskey told the Northern Constitution: “This was a way of acknowledging the support shown to the school during the judging process by the parents and thanking them all for the marvellous comments they shared about Termoncanice.
“These are exciting times for us and Saturday’s awards have given everyone added impetus.
“When Pete Snodden from Cool FM announced that our school had won the award for Outstanding Progress you would have heard the Termoncanice contingent cheering back in Limavady!”
“We are over the moon and it's just fantastic for the school.”
However, with a rising intake and excellent facilities, indoors and outdoors,Termoncanice PS is no stranger to awards.
In 2013, they became the first school in the province to attain Model School in Accelerated Reading and this resulted in receiving an invitation to Parliament from the Shadow Education Secretary.
Mr McCloskey contiued: “The school prides itself on high academic standards - the AQE and GL test scores have been excellent in recent years.
“The staff are extremely nurturing and this was highlighted in a recent ETI Safeguarding Inspection.
“The school’s Gamechanger's initiative was mentioned by ETI which involves the P7 children setting up activities and playing with the younger children at lunch and break-time so that everyone has someone to play with.”
In the past 18 months, the primary school have installed a new playground, a 3G Multi Sports pitch in the main playground and in the coming weeks they will be installing a new fenced basketball court.
According to Mr McCloskey, the driving force behind these initiatives are the 'Friends Of Termoncanice PTA' who have organised an upcoming 10K Challenge for the school community.
As a result of this challenge, the group hope to raise £10,000 to help with further improvements to the school grounds.
Mr McCloskey continued: “We held a sponsored walk recently which raised nearly £6000 and that's in the space of two weeks so it is looking likely that 'Friends of Termonanice' will reach their target.”
It is understood the sponsor money raised has already been spent on building a storage facility in the school's new playground and an outdoor classroom in the nursery with further projects in the pipeline.
According to Mr McCloskey, the month of November will mark the begininng of the 'Getting Ready For Big School Programme' where the Principal , teachers and classroom assistants will visit the nursery weekly.
He explained: “This means when the children step through the doors on September 1st, they will know their teacher and classroom assistant and will be greeted by their first name as they walk through Termoncanice for the first time.
“The only tears on day one of big School will be from the parents!”
Mr McCloskey went on to praise the amount of support the primary school has received throughout the years.
“We always receive such kind feedback from parents and grandparents telling us that it's a great feeling going to work and knowing that their children are safe in our school and they loved the fact that teachers greet each child by their name.He concluded: “The creation of these new initiatives and everything we do in the school is for the children, they are our main priority and it is great that people recognise us for that.”