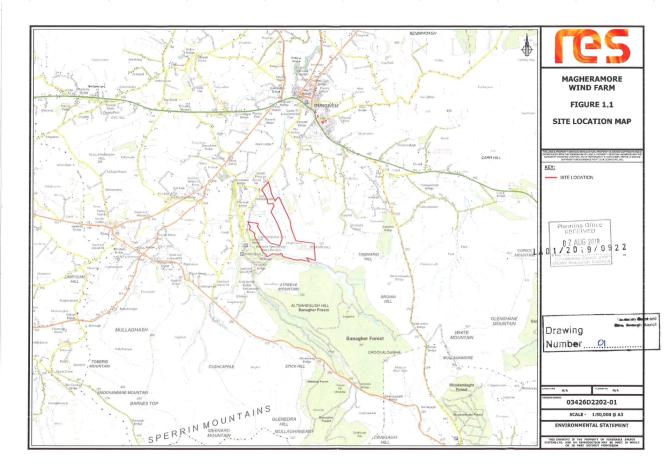 PLANS have been put into place to create a new modern wind farm complex on the outskirts of Dungiven on the Magheramore Road.
A planning application was submitted to Causeway Coast and Glens Borough Council which outlines the plans for this environmentally friendly project.
The application was submitted by the RES Group (Renewable Energy Systems), who are one of the world's leading independent energy project developers international renewable energy company who have operated in the renewable energy sector for a over 30 years.
RES has developed sixteen onshore wind farms in Northern Ireland which equates to 36% of NI's onshore wind capacity.
The construction of the wind farm will include six new wind turbines and associated infrastructure which will include external electricity transformers, crane hardstandings, underground cabling, control building., substation compound, energy storage area, a newly created entrance.
During the construction there will be a number of temporary works including enabling works compound and construction compound with car parking, temporary parts of crane hardstanding, welfare facilities and off site road widening into third party lands on the Banagher, Carnanbane and Magheramore Roads.
The plans have included a number of considerations which sums up the benefit of the windmill construction. They are as follows:
-A simple layout design with few variations in tip heights;
-Reduction of impacts on environmental, technical and engineering constraints and ;

-Reduction in overall land take and ground disturbance through careful design of site infrastructure including tracks and crane hardstandings;
-A building that is integrated and sympathetic to its setting in the surrounding landscape;
-A road access that is well placed to reduce both visual impact and impact on road users;
-A development which sustainable and environmentally responsible;

The projected twelve month construction phase is estimated to create or sustain up to 73 jobs which hopes to bring a boost to the local economy.
The construction is aimed to get under way in the coming months.