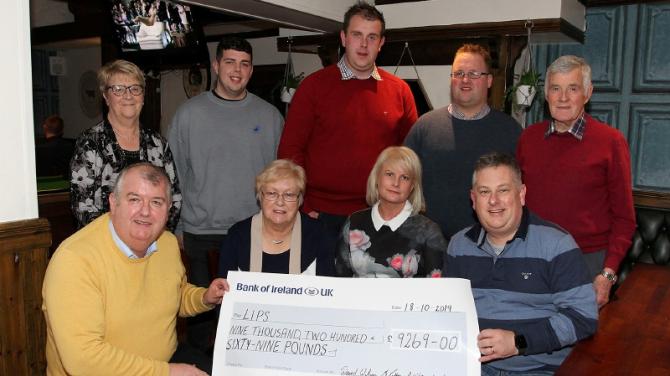 SITTING in the Roe Park Hotel in March, an emotional David Wilson was inspired after hearing Sam Barr’s speech at the LIPS Gala Ball, which led him on the journey to raise over £9k for the local suicide charity.

When David heard the statistic that one in 20 people think about suicide every two weeks in Northern Ireland, he was inspired to plan a fundraiser.

Speaking to the Northern Constitution, David said: “This caused me to reflect on the grief and emptiness that the families and friends went through where there was a suicide.

“I had the idea of having a fundraiser and thought immediately of my father’s 1970 David Brown 990 tractor which I had restored and decided that we would do a tractor run from the most southerly point on the island to the most northerly.”

The men undertook the Ireland run in memory of three young men who died from suicide in the last 20 years - Norman Black, Gareth Simpson and Jamie Barr.

David's son Alan wanted to keep the memory of his friend Jamie alive, Norman Black worked with David and they knew Gareth Simpson through Dungiven and Bovevagh Church of Ireland.
David continued: “Fast forward to Monday September 2 when my son Alan, nephew Mark and neighbour Gregory and myself left for Mizen Head at 7am from the Roe Valley, with the tractor on a trailer.
“We had planned that during the drive, one person would drive the support pick-up, one navigate, one drive the tractor and one rest.
“On arrival at Mizen Head, we started at 6.10pm on our 24 hour tractor drive.”
As the tractor men got in gear they faced their first set back on their national trip.
David continued: “Within the first three minutes, disaster struck with the throttle breaking, the tractor pumping out engine oil, and the tractor seat collapsing.”
David began to panic and even started wondering how he could return people’s sponsorship money.
Thankfully the quick thinking quartet improvised with a cushion for the seat, fixed the throttle with a cable-tie and decided to replace the oil as quick as the tractor lost it.
The tractor run began in earnest and what took place over a pressurised 24 hours included getting lost in a Limerick housing estate, a nervous race against the clock coming through Longford, and many battles with the elements.
David added: “It was with great relief that we rolled into Malin Head at 5.56pm on Tuesday September 3 - having taken 23 hours and 46 minutes to complete the mission.
“Now that the tractor drive has finished, we are astounded to finally calculate we had collected a grand total of £9269 for LIPS.
“I am delighted to know the money will be used within the local community, which is especially pertinent as NI is the fourth worst place in the world for male suicide.
“I would like to take this opportunity to personally thank all those who have so kindly donated, and supported us in our fundraiser.
“I particularly want to thank Alan, Gregory and Mark and all those who helped prepare the tractor, provide logistical support.
“I would also like to thank the families of Jamie Barr, Gareth Simpson and Norman Black for the honour of allowing us to do this fundraiser in their memory.”
Speaking on behalf of LIPS, Sam Barr said the charity are delighted to receive a cheque from David for over £9000, the proceeds from the tractor run.
Sam said: “The run was in memory of three young men that David and Alan knew that had died by suicide.
“They were Norman Black, Gareth Simpson and Jamie Barr .
“The families of the three young men who died were present at the cheque presentation.
“LIPS would like to thank the four tractor drivers for completing such an arduous task and raising such a magnificent sum.
“It would be our intention that this sum could be used in a specific programme to assist young men in our area and we will liaise with David in organising such an event.”