Time to Restart a Heart! 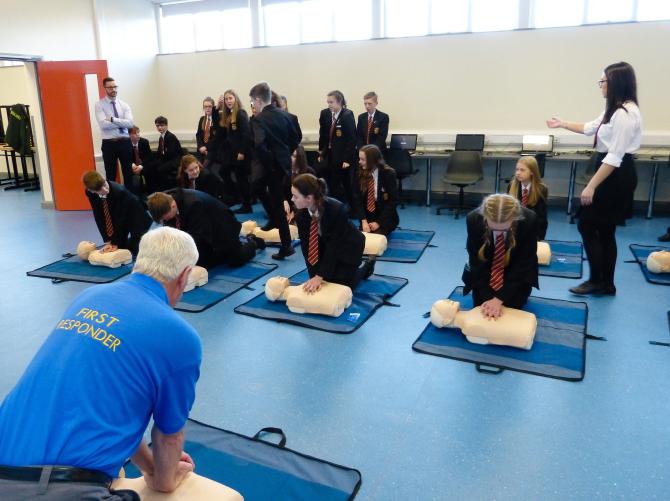 ON Wednesday October 16, the people of Limavady and surrounding areas were encouraged to learn three minutes of CPR.

This vital training marked the global Restart A Heart Campaign, developed and launched by the European Resuscitation Council in 2013 to teach members of the public how to help restart a heart of someone who has suffered a cardiac arrest.

The initiative has been going from strength to strength each year, this time attracting the attention of over 2000 participants.

Mr McFarland continued: “The Rotary Interact, made up of members from Limavady High School, St Mary’s High School and Limavady Grammar, came together to promote this event.

“They went down Market Street on Restart a Heart day to encourage people to get involved.

“The most surprising thing was the number of people who refused to take part as this highlighted the problem with people attempting CPR.

“There is a fear around the process from hurting the person, not doing it right, being sued, not wanting to do mouth to mouth or being too shy/afraid - Global Restart a heart day is trying to bust these myths.

“That is why it is so important to get young people involved and to build on this skill year on year so as they grow up, they have a life long skill that may someday save someone’s life.

“Not only that, we are empowering them with a skill that they can pass on to someone else who could help them deliver CPR until an ambulance gets there.”

According to Mr McFarland, since going operational on August 19, the North West Community First Responders has received 100 alerts to people suffering cardiac arrest, chest pains, breathing difficulties or other serious illness in their own homes.

He continued: “The group continues to grow and is recruiting more volunteers to help respond to these alerts.

“Thanks to all who gave a donation to North West Community First Responders during Restart a Heart.”

A spokesperson for Coastal Core also extended their praise saying: “Well done to all who took part and thank you to everyone for their continued support.”