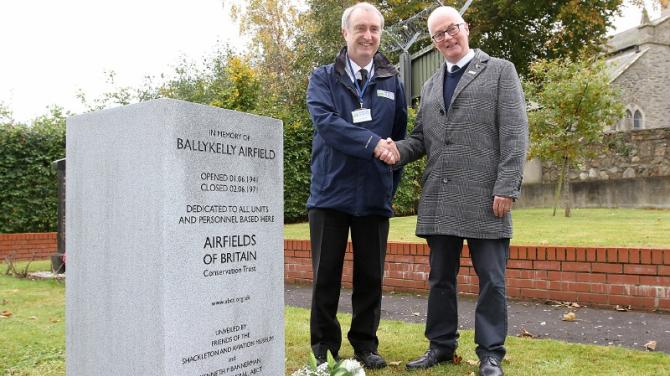 CURATOR and custodian of the Shackleton and Aviation Museum Norman Thorpe has unvield a permanent memorial to the instrumental part the Ballykelly airbase played in World War Two.

After years of campaigning Norman, along with Kenneth Bannerman, Director General of ABCT revealed a new memorial stone at Tamlaghfinlagan Parish Church, remembering the RAF presence in the village from 1941 to 1971.

Ballykelly airbase was built as a satellite for nearby Limavady, opening on 1 June 1941.

As construction of the three runways and support buildings had not been completed, the airfield was initially quiet until a detachment of night fighters from Ballyhalbert arrived in the autumn.

The Coastal Command Development Unit (CCDU) followed in December 1941 and flew a variety of types until moving to Tain in June 1942.

Boeing Fortresses of No 220 Squadron and Consolidated Liberators of No 120 Squadron carried out maritime patrol sorties from the summer of 1942 until early 1943 when they transferred to Aldergrove.

Various Fleet Air Arm squadrons spent short periods at Ballykelly while disembarked, mostly involving Fairey Swordfish units. Nos 59 and 86 Squadrons arrived from Aldergrove in September 1943 for two years and six months respectively, and No 120 Squadron came back in the spring of 1944 until it disbanded in June 1945.

The Joint Anti-Submarine School (JASS) formed in November 1945, and remained until the start of the 1970s for anti-submarine tactics.

Shackletons were based at Ballykelly during this period from 1952, with No 204 Squadron in residence between 1954 when it reformed and 1971.

Nos 203, 240 and 269 became other Shackleton units that spent significant periods at this busy airfield, which was revamped to quite a degree during the early 1950s.

Various Fleet Air Arm squadrons would also join from time to time but Ballykelly began to wind down in a flying sense from late on in the next decade.

The final unit to depart was No 204 Squadron in the spring of 1971 and the airfield was closed in early June that year.

Becoming Shackleton Barracks in the hands of the Army that month, the site was used as such until 2008.

A significant amount of the airfield site remains, including the three runways, one of which most unusually crossed a railway line.

Some buildings also survive, including a post-war cantilever hangar specially created in the 1960s for the Shackletons that became one of the biggest in the United Kingdom, and the control tower.

The site is now either owned or managed by MJM Group - bought airfield 2016, Shackleton and Aviation Museum, and Tamlaghtfinlagan Church of Ireland Ballykelly.

See page 13 of this week's paper for more pictures.