Bringing the outdoors in at Termoncanice 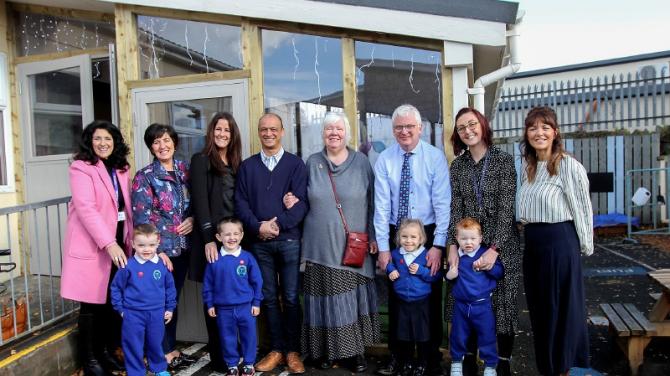 THE Scandinavian experience of creating an outdoor feel indoors has inspired a new nursery    extension at Termoncanice PS.

Often the unpredictable Limavady weather in autumn and winter can scupper plans to play outside for the children so there was a clever idea to allow the best of both worlds.

The newly built unit, using a Scandinavian inspired design, will allow for an outdoor experience while still allowing for cover from the elements in an indoor setting.

Termoncanice acting Principal, Leo McCloskey, spoke about the new build saying: “The idea is that if the weather is too bad for activities outside then we now have a facility where we can do it inside.

“We are bringing the outdoors indoors.

“Even if the weather is good the new extension is a valuable resource.

“The new extension also helps to relieve space issues for the nursery.

“In previous years we have been oversubscribed with pupils and the new area has allowed us to take in more children so it is very helpful for the school and for the staff.

“There was a special effort put in for fundraising the new unit.

“The PTA, parents and staff worked together to make this all possible.”

Representatives from the PTA and board of governors were present to join in the unveiling of the new nursery unit.

Also present was Anne King from Families First, the organisation that bestowed two awards to Termoncanice Primary School and Mr Leo McCloskey at the Families First NI Awards in October.

Families First has also been generous to donate funds to subsidise after school programmes at the school such as Busy Bees and Homework Club.

This is not the end of the building which will take place at Termoncanice.

There are also plans to upgrade the playground to the rear of of the school where it is hoped that a new sensory play area can be constructed which will only add to the break and lunchtime fun.

Termoncanice will have an open night especially for Nursery places which will give parents a chance to see what Termoncanice can offer budding pupils.

The open night will take place on Wednesday November 27 where the public are invited to the school.