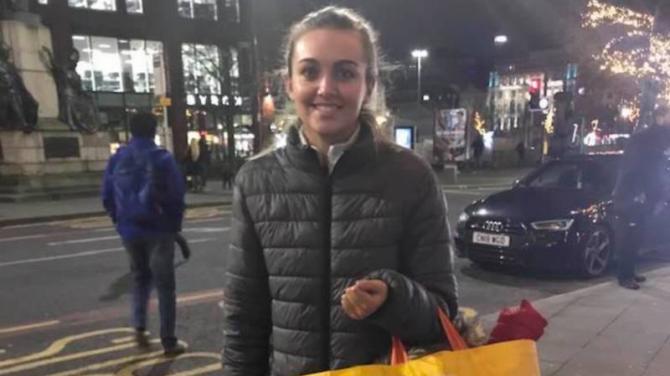 A YOUNG student from Ballykelly has spoken of her ordeal being caught up in a major fire which engulfed a multi story student accommodation building in Bolton.

On Friday evening November 15 at around 8:30pm, emergency services were alerted to the block of flats known as ‘The Cube’ where the initial blaze had broken out and had spread furiously to the upper floors leaving two people injured.

The brave 21-year-old managed to escape the inferno along with 200 other students after sounding the alarm and alerting the authorities to the blaze.

Speaking to the Northern Constitution, Kate, who is a third year Sports Rehabilitation student at the University of Bolton and the daughter of former Irish international athlete, Bobby Farren, spoke of the horrific ordeal saying:

“I was getting ready in my room for a night out with my friends. My friend had saw what she thought was a small fire when looking out the window.

“I ran into the hall and hit the fire alarm and we started knocking all the doors to make sure everyone knew that there was a fire and they had to get out.

Kate continued: “We then realised that the fire was getting much bigger so there was a bit of a panic.

“I went down and got the fire fighters and told them where we had come from and they then got the rest of the people out.”

“We were able to get everyone out within about 5 minutes or so. It all went very quick. It's a blur.”

According to devastated student Kate, she has lost all of her belongings and is currently staying at a nearby hotel alongside the other students caught up in the blaze.

Kate explained:“I've lost all of my clothes and everything that was in my room.

“I was getting ready to go out at the time so I was only wearing a crop top and a pair of flares.

“Thankfully one of my friends gave me a coat to keep warm but I'm just happy everyone was able to make it out OK.”

While future accommodation plans remain unclear Kate was pleased with how the effort of University of Bolton had helped to alleviate student worries in the short term.

“The university has been amazing in dealing with everyone affected.

“There's been money put aside for hotels and food which has been a massive help.”

Mayor of Greater Manchester, Andy Burnham spoke highly of Kate and her fellow students when speaking with Channel 4 news saying, “There was an organisation within this building amongst the students that was highly effective when it needed to be.

“Kate and Jade, two student co-ordinators, went round the building, knocking on the doors and that is a fantastic thing that they did.”

Professor George E Holmes, the President and Vice-Chancellor of the University of Bolton, in a press statement said: “Supporting the welfare of our students is our number one priority and we have moved swiftly to assist in anyway we can.

“University colleagues worked through the night to make sure support was in place for students over the weekend.”

Concerns have been raised about the cladding on the outside of the building, although it is a different material to that used at Grenfell Tower in London, which killed 72 people in 2017. However the comparison remains ominous.

An investigation has been launched and is underway which will determine the cause of the large fire.