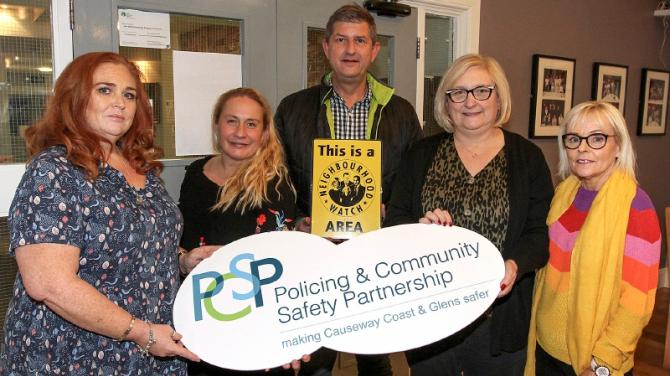 A THIRD neighbourhood watch scheme has been set up in the Limavady area following a recent information session in the LCDI building last week.

Hosted by the Causeway Coast and Glens Policing and Community Safety Partnership (PCSP), the informative evening was aimed at concerned members of the local area who wished to find out more about how the scheme can help themselves and their neighbours feel safe.

It is understood that a total of 290 houses in Limavady will now be covered by the neighbourhood watch scheme. In attendance at the event were PCSP Members, Sinn Fein Councillor Brenda Chivers, SDLP Councillor Ashleen Schenning, PCSP Officer Melissa Lemon, PC Mark French and Caroline White.

According to Sinn Fein Councillor, Brenda Chivers, she believes the schemes will prove beneficial to the local community.

She told the Northern Constitution: “Unfortunately there has been an increase in anti-social behaviour in parts of Limavady so we decided to hold a information night to try and set up further schemes.

“There are two schemes already established in the Bells Hill and Windyhill areas of Limavady and now a third one is set for Scroggy Road.

“Anyone can be part of the scheme and it’s basically looking out for your neighbours.”

Neighbourhood Watch is a partnership between local communities, the police and PCSP’s (Policing and Community Safety Partnerships), with the aim of helping people protect themselves and their property and reduce the fear of crime.

Neighbourhood Watch schemes create effective communication between residents and police, with local co-ordinators acting as the primary point of contact.

They can make a real difference in local communities.

In an evaluation commissioned by the Northern Ireland Policing Board, PSNI and Department of Justice, 86% of people who live in a Neighbourhood Watch area expressed that they felt very safe or quite safe, with almost all areas reporting that crime and anti-social behaviour had decreased since the establishment of the scheme.

“The information evening was a success and the fact we managed to get a new neighbourhood on board including two new coordinators is fantastic.

“In Northern Ireland we are all good neighbours anyway but this scheme legitimates an area to confirm the neighbourhood is looking after each other and they are committed to keeping an eye on one another.”

She concluded: “The scheme is working so far in my own area in Ballybogey so we would encourage everyone to set it up.”

PCSP Chair Alderman George Duddy said: “Neighbourhood Watch is an important initiative that delivers greater vigilance in communities and helps residents protect themselves, their homes and their properties.

“It is a huge benefit to our elderly neighbours and may reduce the fear of crime while increasing community spirit.

“It is open to everyone and is simple to join and I would encourage all residents to consider starting a Neighbourhood Watch scheme within their community.”

If you are interested in setting up a scheme in your area or would like further information on NHW or the work of the PCSP, please contact pcsp@
causewaycoastand
glens.gov.uk or call 028 7034 7034.