LCDI hoping to 'drive' out poverty this Christmas 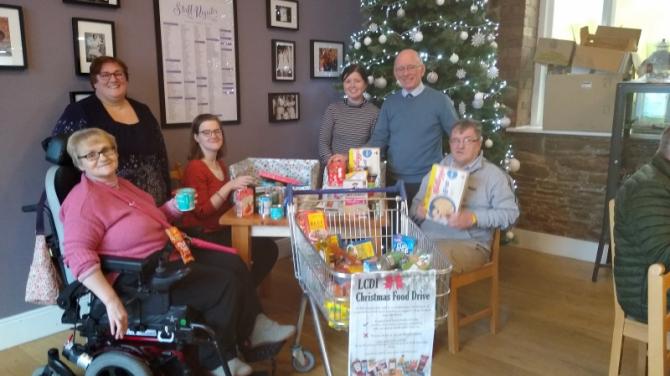 THIS time of year can be difficult for families in the Roe Valley that are struggling financially, and are hoping to enjoy the festive season without worry.

As Christmas is fast approaching, devoted staff of the LCDI Community Cafe are coordinating a food drive in conjunction with local charities and are calling on members of the community to support those in need this holiday season.

Earlier this year, LCDI in partnership with the Western Health and Social Care Trust set up a holiday hunger programme to help local families manage the additional costs of feeding children during the school holidays.

As a result, staff discovered an existing and growing need in the town which encouraged the dedicated team to step up their game this Christmas.

According to Manager of LCDI, Joanne Kinnear, food poverty in Limavady is a “very real thing.”

Joanne told the Northern Constitution: “The uptake of the holiday hunger programme made us realise that for individuals and families who are just getting by, any change to their routine such as holiday can be make or break.

“It is always very successful but this year we have intensified our effort to reflect the growing need.

“It is frightening that 179 years after Limavady Workhouse first opened its doors that there are still people in Limavady who find themselves in need of a helping hand just to feed their family.”

Limavady Community Development Initiative (LCDI) is a cross community charity whose work is focused on serving the whole of the community across the Borough.

LCDI was established in 1987 by a group of local people concerned by the increasing levels of unemployment in the Borough at the time - a few of those original founding members are still on the Committee today.

According to Joanne, this is not the first year of the accommodating Christmas food drive.

She explained: “The food drive happened in previous years but on a smaller scale with donations being made only by LCDI.
“This time round we are asking the wider community to get involved as the need is just growing year on year.”

It is understood the donations to the Christmas Food Drive are supporting the excellent work undertaken by Saint Vincent De Paul and the Salvation Army 365 days a year in the town.

Located at the Salvation Army Centre on Main Street, in the town, the Roe Valley Community Foodbank was set up in early 2015, at the behest of a variety of Churches and community groups, after it became evident that a space where food could be contributed and made available was necessary for those in need.

Up until then food was being distributed by Christian Charities such as St Vincent De Paul and the Salvation Army.
Joanne of LCDI went on to highlight the importance of the charity's work, particularly at this time of year.
She said: “LCDI was founded 30 years ago by local people for local people and our role is to identify and address the existing and emerging need.

“Our Food Drive project does this in a very real way by allowing us to support our friends and neighbors in having a happy Christmas, one where they are not worrying about how to feed their families.”

If you wish to contribute to the Food Drive, you can donate the following;
Canned and dried foods, cereals, sweets, chocolates, biscuits, toiletries, baby products, small gifts, toys etc.
Frozen, fresh or out of date products will not be accepted.

Bulk collections are available.
The drop off points are located at LCDI Roe Valley Hospital and LCDI Refurnish shop.
Donations will be taken until Thursday December 19.