Willie is an unsung 'Titan' 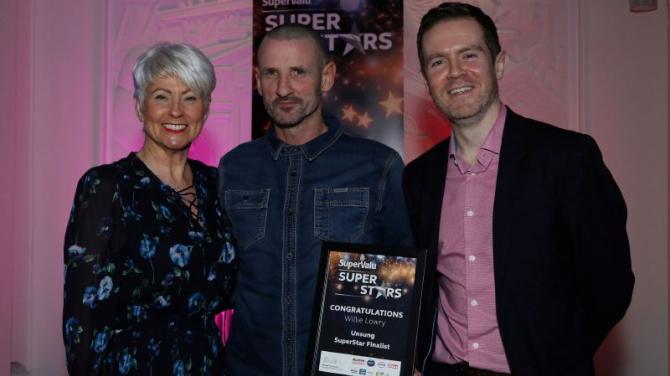 A LIMAVADY kickboxer has been recognised as an 'Unsung SuperStar' at the third annual SuperValu SuperStar Awards for his dedication to the running of the Titans Kickboxing Club in the town for the past 20 years.

Willie Lowry has been recognised for going beyond the call of duty to help and support his local community.

The SuperValu SuperStars finalists' ceremony was hosted by TV personality Pamela Ballantine at Titanic Hotel in Belfast on Thursday November 21, and each finalist was awarded with SuperValu vouchers for their individual efforts.

A humbled Willie spoke to the Northern Constitution to share his pride in receiving his award.

Willie said: “I'm really chuffed to get the award and to have got an opportunity to have attended the event in the Titanic hotel in Belfast.

“I was really humbled being at the event and being nominated among so many great people who have achieved so many amazing things in their local areas.

“It's a proud moment for me personally and for the club and all the people surrounding the club.

“I usually like to stay in the background of these type of things and just work along with other coaches.

“The award was as much for the other coaches and club members as it was for me, it's great for the club.”

Willie also spoke of how pleased he was with the way the Titans Kickboxing Club has grown over the years and its current respected position within the martial arts community.

He added: “The club is going from strength to strength and this has been one of our best years.

“We tallied a total of 550 medals collected for club competitors in competitions throughout the year where we were involved in local, national, European and Worlds tournaments.

“We recently competed at the WKU World Championships in Austria where we picked up three gold medals and a several silver and bronze medals.

“It's been a great year for the club and long may it continue.”