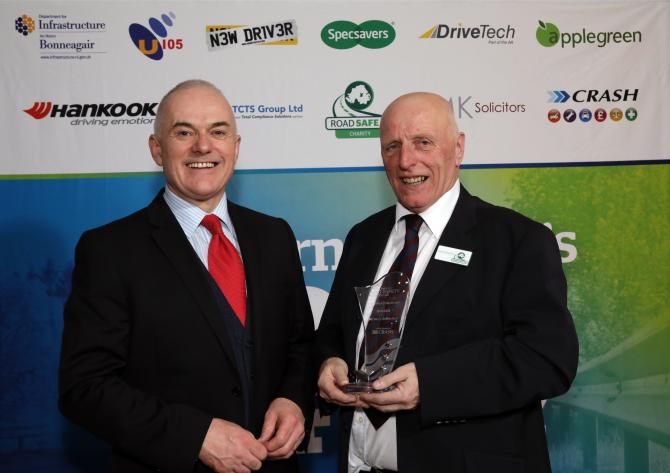 A DEDICATED road safety advocate from Eglinton has been recognised at the recent NI Road Safety Awards.
Local man, Harry Rutherford was one of many road safety champions in Northern Ireland who were officially acknowledged for their contribution to helping improve safety in their communities.
The devoted campaigner, who has given over 50 years of service to the voluntary movement, manged to scoop up the 'Lifetime Acheivement' award during the 2019 ceremony which took place on Friday at Cultra Manor, Belfast.
Upon receiving his remarkable award, Eglinton man Harry told the Northern Constitution:
“The years have flown by since I first became involved with the road safety movement.
“I have been volunteering since I left school and started my first job.
“I do enjoy promoting road safety as it's a very important thing to be involved in.
“As a committee we try to educate youngsters from primary school level as we feel it's important to learn about at an early age.
“I have loved every minute of it and because there is always so much going on, I didn't realise time was going by so fast!”
Having been involved in a car crash as a young man, Harry claims the accident ignited his passion of promoting road safety in the local community.
Harry recalled: “I was already a member of the Foyle and District Road Safety Committee when the accident happened.
“I was a front seat passenger and this was before seat belts were compulsory or were non-existent.
“A car drove in front of us and I was thrown through the window and my jaw caught the bonnet.
“I still have scars on my face from it.
“The accident made my mind up to stay on at the committee – it made me more passionate and determined to try and do something for road safety.
“I am still on a high and I was very taken aback at receiving my award but also very grateful that my work has been recognised.”
A short summary of why Harry was honoured reads: “The Lifetime Achievement goes to a gentleman who has given over 50 years of service to the voluntary road safety movement.
“He has been a driving force behind many campaigns.
“In particular he has been passionate about cross border co-operation on road safety.
“As well as young driver and primary school events.
“He has held various Officer positions in both the Foyle and District Road Safety Committee as well as Road Safe NI.
“Whilst his leadership has been invaluable to these organisations, what is so commendable about our winner is that he is willing to lend a hand and do any job required to deliver successful events.
“He has been described as Mr Reliable.
“You can always count on him to respond to any request.
“Often travelling long distances at his own expense and giving up his time.
“Another quality of our winner has been the relationships he has built up over 50 years.
“He knows the benefit of working in partnership with others such as emergency services, government bodies and others.”
The NI Road Safety awards, now in their fifth year, are organised by Road Safe NI Charity and leading accident management specialist, CRASH Services.
A total of 15 awards were presented at an event attended by more than 100 specially invited guests.
Pat Martin MBE, Chairperson of Road Safe NI said: “We had a fantastic response to the awards again.
“There is such a vibrant and committed road safety community working all over Northern Ireland.
“We are delighted to play our part in recognising those who go the extra mile.
“The winning entries really stood out for their efforts over a long period of time and for delivering innovative projects.
“There is so much good work going on across our schools, local communities, emergency services and businesses.
“The award winners are an inspiration to others and there is no question their efforts are saving lives on the road.”
Jonathan McKeown, CEO of CRASH Services, said: “As a business with close connections to road users we are honoured to support the NI Road Safety Awards.
“We congratulate everyone for their extraordinary commitment to road safety.”
Winners across the various categories were Edwards Primary School, Castlederg and Autoline Insurance (Education), Mr Steve Carter, Newtownabbey and Mrs Isabella Collum, Fivemiletown (Lollipop Person), Gavin Sinclair and Ann McKiver (Driving Instructor), Constable Stephen Dickson (Emergency Services), Patricia O’Neill (Voluntary Sector Individual), A1 How many Must Die? (Voluntary Sector Group) P Keenan Roads (HGV/ LGV), Hughes Insurance (Business), Your Choice programme from NI Fire & Rescue Service. Mid Ulster and Fermanagh and Omagh PCSP (Public Sector) and Mr Harry Rutherford (Lifetime Achievement).
Category sponsors included the Department for Infrastructure, Specsavers, New Driver NI, Hankook Tyres, Applegreen, JMK Solicitors and Drive Tech, part of the AA and TCTS Group.
For more information or to get in touch, please visit roadsafeni.com