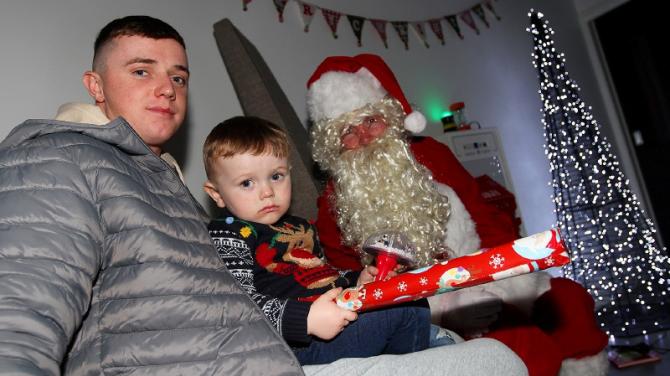 A DETERMINED Greysteel family have come together to create a unique and inclusive environment for children of all needs and ages with an emphasis being placed on children living with Autism and Sensory Processing Disorders.

Eamon Cooke and his family, which includes his wife, Lee, son Orrie and daughter Tamar have recently opened Pickleberry Pop at The Vale Centre in Greysteel, where the inventive idea is receiving top praise from all those who visit.

The inspiring initiative created by Eamon and his family was motivated by his personal desire to have a place for his family to feel calm and at ease while also helping other families in a similar situation.

Eamon spoke about the family’s struggles: “Tamar is seven years old and has Autism and SPD (Sensory Development Disorder).

“A few years ago Tamar was totally non verbal which led to daily frustration which led to tantrums in all aspects of life.

“We always knew we wanted to do something for our daughter, Tamar and other children like her.

“We knew there weren’t a lot of facilities available that were geared towards these children.

“We also wanted to create a place where all children can go and enjoy. Often on family outings we were split when doing activities.

“Now we can enjoy ourselves together as a family under one roof along with other families.

“We decided to open Pickleberry Pop, which we believe is the only centre of its kind.

“We decided to open the centre to help other families like ours who can come together under one roof to play, learn and gain the sensory input which these children desperately need.

“It’s also a great place for parents to come with their children where there is no judgement.

“It is important that there is a space where there is common understanding among parents to take a small break and relax with their children.”

Included in the facility are a number of different rooms which will allow for individual experiences for all children to play in and help learning.

There is an Immersion Room which consists of sound and light therapy items.

There is a 45ft wall surrounds you as you enter with vibrant and stimulating animated videos while the surround immerses attendees allowing for ultimate sensory input.

There is an interactive suite which has two interactive 15ft walls combined with another interactive floor which are full of games which encourages problem solving, improves hand to eye coordination, fine and gross motor, builds muscle tone and core strength and lots more by merely playing specifically designed games and most important of all facilitating fun.

There is a Sensory Play room which is full of sensory and educational toys, a ball pool, fibre optic lighting and bubble tubes all proven to aid with sensory input and development.

There is a Games Den where there are 1000’s of games to choose from using retro and latest consoles.

There is also an on-site studio where a number of different weekly classes are offered to suit all needs and ages. The classes include music and drama classes, dance classes and hair dressing.

To add a festive element to the centre there is also an Immersive Santa experience where children will be given a chance to see snow falling down the walls, reindeer’s walking around and enjoying relaxing Christmas music to help ease nerves and any anxiety.

Further information can be found about PickleBerry Pop on their Facebook page.