Sammy loses his locks for charity 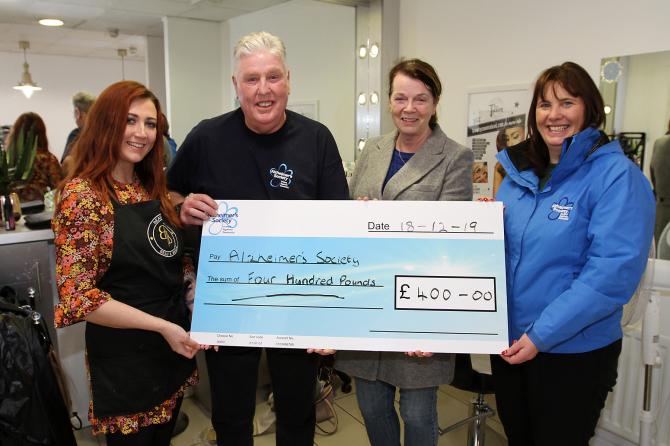 A SELFLESS Limavady man has been given the Christmas chop in aid of Alzheimer's Society, a charity that is close to his heart.
Following the diagnosis of his partner's mother, dedicated local man, Sammy Millar, has raised £400 for Alzheimer's Society, by growing his hair and fundraising within the local community in preparation for the big cut.
It was an emotional Wednesday afternoon for Sammy and his partner Peggy, who went along to hair and beauty salon, 'Beau and Belle' in Limavady to show her support.
Speaking after his charity hair cut, Sammy told the Northern Constitution: “I feel so good as I have always wanted to do this - my partner's mother has dementia and I have friends who suffer from the illness so it is a cause that is close to my heart.”
Sammy continued: “I have been fundraising for about six weeks, calling in with friends who have all generously donated to such a worthy cause.
“I just want to thank everyone who donated, it's very much appreciated and it means a lot to me.
“I really hope they find a cure some day for this awful disease.”

Meanwhile, Sammy's partner Peggy, expressed her gratitude towards his thoughtful idea.
She told the Northern Constitution: “I think it's fantastic that Sammy has done this.
“He's such a caring person and I really appreciate it.”
According to Peggy, it has been difficult to watch her mother, who was diagnosed with dementia eight years ago.
She continued: “My mother is 87 years old and is currently in the later stages of dementia.
“She was always an outgoing person and she worked as a cleaner at a local school.
“She just loves the company when we go to visit her but it has been very hard to experience each stage of the illness.
“I just feel there isn't enough support out there for both carers and families, people need support and I just hope that someday a cure can be found.”
There are currently around 850,000 people with dementia in the UK. This is projected to rise to 1.6 million by 2040.
Dementia describes different brain disorders that trigger a loss of brain function. These conditions are all usually progressive and eventually severe.
Alzheimer's disease is the most common type of dementia, affecting 62 per cent of those diagnosed.
Other types of dementia include; vascular dementia affecting 17 per cent of those diagnosed and mixed dementia affecting 10 per cent of those diagnosed.
Sammy hopes to continue fundraising for the illness.
Sammy added: “I'm going to join Peggy at the next Memory Walk for dementia which takes place at Stormont.
“It will be something different and something which is very important to the both of us.
“I also want to thank everyone for their kind donations at this time, I couldn't have done it without you.”