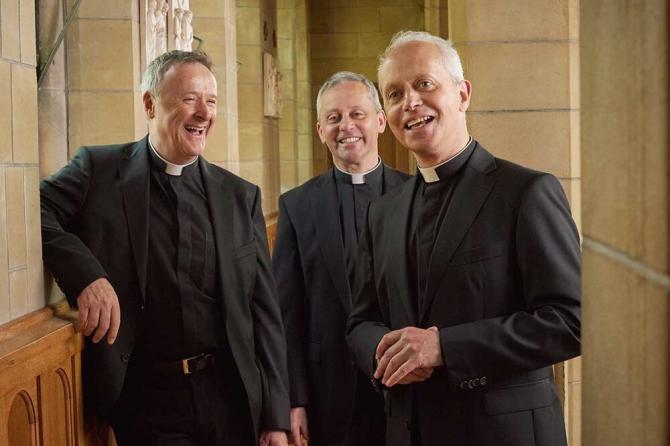 TWO performing Priests, originally from Claudy, have been recognised for their singing stardom in the latest New Year Queen's honours list.
Fr Eugene O'Hagan, his younger brother Fr Martin O'Hagan and Fr David Delargy - who achieved global success as singing group 'The Priests' – accepted MBEs (Most Excellent Order of the British Empire) for their music and charity work.
Eleven years after signing a recording contract with Sony, the classical music sensations, and full-time clergymen, enjoyed a remarkable chart-topping musical career on both sides of the Atlantic.
The multi-platinum sellers' first album in 2008 sold more than three million copies, making it the fastest-selling classical debut of all time.
Speaking with the Irish News, Fr Eugene said the honour recognised music's role in building connections across the community.
"Music is a great bridge. It has been an enriching experience on both sides," he said.
"It is a recognition of that cross-community aspect to the world of music and something people have been able to tap into, so we are happy to accept the nomination."
The priests contribute to a charity called Sightsavers which works internationally to prevent blindness.
The O'Hagan brothers grew up just outside Claudy, before they boarded at St. MacNissi's College, Garron Tower, Antrim, where they met their singing colleague Father Delargy.