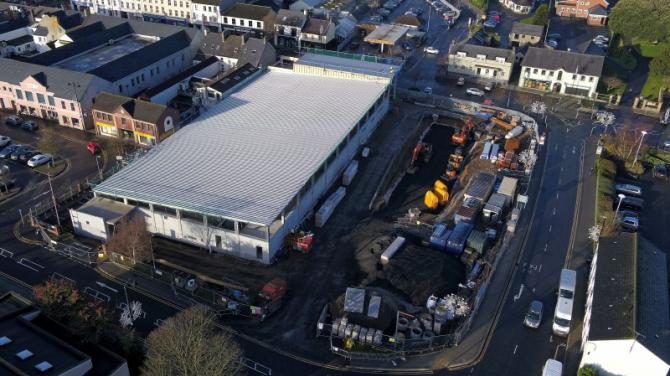 MAJOR developments of a new state-of-the-art Lidl store in Limavady are well and truly underway.

Back in September, the Limavady super-market closed its doors to customers in order to commence the construction of a new building which involved demolishing its existing premises along with two neighbouring retail units on Main Street.

Lidl originally built the Limavady supermarket in 2000, opting for a barn-like appearance in an attempt to be sympathetic to the character of the town.

Earlier last year, a spokesperson for Lidl Ireland and Northern Ireland told the Northern Constitution: “We are very excited about the prospect of bringing our state of the art new concept store with the same great value products to our valued Limavady customers.”

The brand new store is expected to re-open next month (Feburary 2020).

Meanwhile, the approval of Home Bargains has been widely welcomed as an opportunity for Limavady to develop the vitality of the town centre, and is expected to create as many as 60 jobs.

Last April, Causeway Coast and Glens Borough Council's planning committee signed off on the proposal for the long-awaited Limavady store.

The discount chain was founded in 1976 by Tom Morris in Liverpool.

The 22,000 sq ft site at the rear of Catherine Street and Linenhall Street will also include a 148-space car park, a service yard, as well as a new access road and entrance.

“It is expected that the development will generate some 60 jobs when operational.”

Eamonn Loughrey, from Inaltus town, planning expressed his delight at getting the project approved after years of work to ensure planning approval.

Mr Loughrey told the Northern Constitution: “I am honestly thrilled, this is fantastic news after a lot of work to make sure the project gets approved.

“Following the consultation period we didn't have a single objection from residents or traders, which shows how important the retail project is to Limavady.

“We are very grateful to the planning team for working with us to get this over the line.

Construction of the Home Bargains building is expected to commence very soon and should take between nine months and a year to complete.