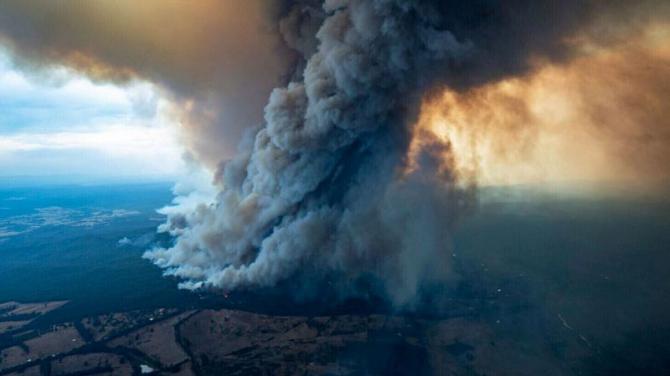 AS the world watches on with horror at the national bushfire crisis in Australia that shows no sign of letting up, the Northern Constitution has spoken to three locals who are currently living Down Under.

The fires have been raging since September and have claimed the lives of 27 people, destroyed over 2,000 homes and killed around 1.25 billion animals. This includes thousands of koalas and other iconic species such as kangaroos, wallabies, kookaburras, cockatoos and honeyeaters burnt alive, and many thousands more injured and homeless.

The eastern and southern sides of the country have been the worst-affected, with scientists warning that this hotter, drier climate will contribute to fires becoming more frequent and more intense in the future. The deadly fires have been fuelled by a combination of extreme heat, prolonged drought and strong winds.

The country is in the grip of a heatwave, with record-breaking temperatures over the last three months.

Drumsurn native, Séanan Woods who immigrated to Australia with her boyfriend Michael only a few months ago, explained the fear and horror of being evacuated from their new home.

She told the Northern Constitution: “We were living in The Hunter Valley, north of Sydney in New South Wales and we were evacuated for several hours.

“The bush fires were literally over the fence of the back garden!”
She continued: “Being evacuated was so scary- my sister in law was stuck at work and we had to go lift our nieces from daycare and drive to the Central Coast.
“We had to leave the dog at home so we were panicking and hoping he would be alive when we got home.
“Thankfully he was fine when we got back several hours later.
“I just remember the helicopters everywhere dropping water and kangaroos jumping all over the roads, it was awful.”

According to Séanan, who is now living in Coogee, she admits the smoke from the bushfires is still “horrific” to the point where the couple haven't seen the sun in weeks.
She continued: “It’s been very smokey and there’s lots of people walking around wearing gas masks which seems dramatic but it’s probably a good idea. “We were also told that breathing in the air is equivalent to smoking a box of cigarettes.
“We have not taken any precautions yet because we hadn’t realised the seriousness of them and we have currently no plans in place but we really need to think of something if it’s going to get worse.”
Meanwhile, Greysteel native, Jade Sweeney, who moved to Australia around five years ago, explained how she had never experienced anything like it before.
Jade said: “I moved over here originally for a working holiday but came back again to settle with my Aussie partner.
“We live in Geelong and the fires are about an hour away from us but there has been a warning out for this area too.
“We can still see and smell the smoke from our house.
She continued: “It's pretty scary.
“There's no way to tell when they will stop and so many animals have been killed.
“Koalas are now endangered/ going extinct.
“It's been horrible.
“My sister lives in Sydney too and she's considering moving down here because the air pollution is so bad there, it's like smoking 40 cigarettes a day.”
Jade went on to say: “This is the first time I have experienced anything like this, which is worrying as nobody has any idea when the fires will stop and we need rain, which is unlikely to happen.
“The air pollution has become one of the worst places in the world.”

Limavady man, Paddy Forrest who moved Down Under just last year, told the Northern Constitution: “I went out on Monday to a massive food bank located on the outskirts of Sydney.
“I literally just filled my car with everything I could and took the food out to volunteers who were dispatching it to areas affected by the fires.
“When I got there I volunteered to go out with them to the fire areas driving trucks so I’m currently waiting on them to get back to me.
“I would love to help out as it has been so devastating for everyone.”
Normally, temperatures peak in January and February, meaning the country could be months away from finding relief.

If you wish, donations can be made to several organizations working toward victim relief and recovery, including the Australian Red Cross, Salvation Army Australia, the NSW Rural Fire Service, and the St. Vincent de Paul Society Australia.
You can also help the devastated animal population by giving to wildlife rescue and treatment groups like WIRES, the Port Macquarie Koala Hospital, and Currumbin Wildlife Hospital.