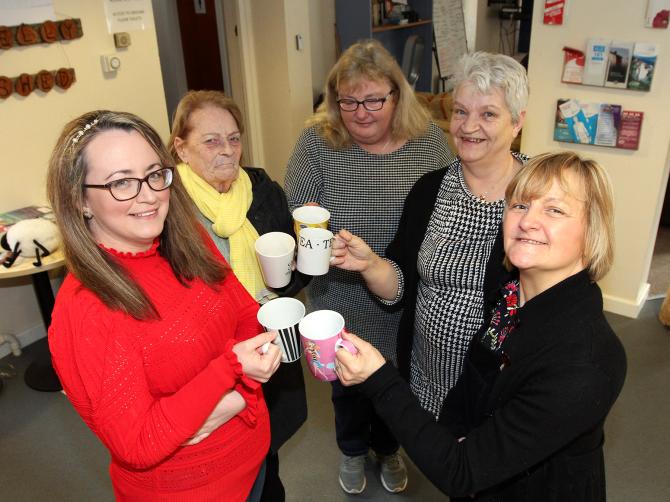 AN exciting new initiative, aimed at devoted ladies across the borough who need a little time out to themselves, has been established in the local areas of both Limavady town and Ballykelly.
As a nod to the Men's Shed organisation, where men meet and socialise, the Hen's Shed establishment provides a free support network for women in the local community, where they can come together to share their own stories and enjoy each other's company whilst forming new relationships and learning new skills.
On January 7 this year, supported by the team at LCDI, the Limavady Hen's Shed was officially launched, making the all female initiative the first of its kind in the town.
Speaking to the Northern Constitution, Limavady Volunteer Centre Manager, Ashleen Schenning emphasised the importance of the new group, providing a 'safe space' for local ladies who need a little time out from life responsibilities.
Ashleen explained: “The ethos of the Limavady Hen's shed is very much in keeping with the ethos of the Limavady Town Team, where the concept was first promoted, which is local people providing local solutions.
“Local women identified through the Limavady Town Team, the need to have a safe space where they can improve their Capacity (skills , knowledge and confidence) to enjoy each other's company and to collectively make inroads to the challenges facing the local community.
She continued: “Limavady Hen's shed has been a project without a name for over a year here at LCDI but it formally started in January 2020 when the group secured funding from the Tampax fund, the objectives of which were a perfect match for the work of the Limavady Hen's Shed.”According to Ashleen, the Limavady Hen's Shed is led by the members who work hard to design, develop and implement the daily programme of activities.
Ashleen continued: “This term ( Jan - March 2020) the hens meet every week in the community Café in LCDI, which is indeed a warm coop for the winter months.
“Here they take part in a range of activities based around an introduction to artistic expression which includes activities such as pottery, creative writing, signing, wool craft, dance and drawing
.“As the weather improves the Limavady Hens hope to move outdoors to get involved in the community allotments and community farm at LCDI.”
One of Limavady Hen's Sheds founding members, Jennifer Campbell, expressed her excitement at the new group saying:
“"I can't wait until the summer nights when we are sitting drinking a glass of something cold and eating a pizza that we have made in our outdoor community Pizza Oven using produce which we have grown.
“It will be great Craic!”
Anyone interested in finding out more or getting involved you should contact Ashleen Schenning at LCDI on 02877765438.
You can also follow 'Limavady Hen Shed' Facebook page.
With the recent launch of the five year development plan for what is now known as Ballykelly Men's Shed and Community Association, the Administrator for the group, Mary Lynch believes there's a healthy connection between the two Sheds.
Mary explained: “The Ballykelly Hen's Shed evolved naturally out of the Men's Shed.
“The group was formed in October and has been going from strength to strength ever since.
“We do a range of different things like crochet, knitting, arts and crafts, armoatherapy and we have a female counsellor who comes to the centre.
“We are also fully disabled accessible.”
According to Mary, the main focus of the newly formed ladies group in Ballykelly is looking after women in the local community.She continued:
“This is because 99% of carers are women, so our focus is looking after the girls – we have ten ladies so far and all of them are carers at the minute.
“Two at present are looking after ill relatives and it's very stressful for them so this group is benefiting them as it's time away from caring responsibilities and an opportunity to chat to other women.”
For Mary, the group has also been a lifeline for her when it comes to taking time for herself.
She explained: “ I am a carer myself, I look after my son and husband so it's time out for me and it also gives me the opportunity to use my skills and help others.
“I also suffer from mental health anxiety so it helps to be with someone else, for other people it's not a solution but for others it is.”
Founder of the group, Lorraine Vaughan Shaw, who is also a full time carer, told the Northern Constitution that she is “delighted” to announce the development of the Ballykelly Hen's Shed.
Lorraine said:
“The aim of the group is to bring women together for social and community activities. “These types of groups are really important to us as we live in rural isolated
areas and some of us are carers for our families.
“The group gives us a chance to support one another and to share experiences.
“The Men's Shed have provided us with a dedicated space and our own kitchen in the community rural hub which is open to all groups and charities who need a safe comfortable space to meet.
“We are hoping to attract more women of all ages to come along.
“The group is a great help to me as it gives me time out for myself as a
full time carer.
“We can participate in any of the services and courses on offer in the hub and intend to share resources with the Men shed.
“We meet every Tuesday at 3 Shackleton Drive in Ballykelly.”
Anyone interested in finding out more or getting involved should contact Ballykelly Men's Shed and Community Assocation on 028 7776 7232.