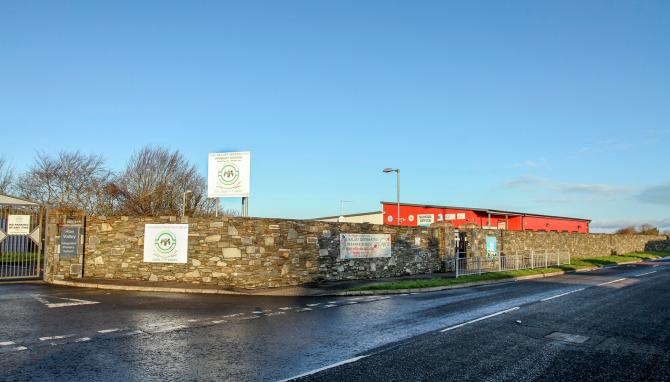 PLANS to build a new state of the art Primary School on the Ballyquin Road in Limavady have been approved.
The school, which is set to be developed within the grounds of the old Gorteen Hotel site, will be the new home of Roe Valley Integrated Primary School once construction works are completed.
The news emerged during a meeting of the Council's Planning Committee at Cloonavin in Coleraine on Wednesday.
The planning proposal states that the modern school will be made up of seven new classrooms, play facilities as well as a stand-alone nursery unit. Car parking and access routes are also set to be developed at the site which will be built near the new Centra store on the outskirts of the town.
Sinn Féin Councillor Dermot Nicholl proposed the approval of the planning application. His decision was supported by Joan Baird of the Ulster Unionist Party whilst the remainder of the chamber voted unanimously in favour of the decision.
Currently, Roe Valley Integrated Primary School is located at Roe Mill Road in the town. However, recent developments signal that the school's 200 pupils will be on the move in the future. Last year, the school had an intake of roughly 30 Primary One pupils. However, with a brand new school set to be built in the future, the school's Principal is hoping for a bright future for Roe Valley Integrated Primary School.
Sinn Féin Councillor Brenda Chivers welcomed the recent developments expressing her delight surrounding the planning approval.
“The new site for the Roe Valley Integrated School which has been in the process for a number of years now,” said Councillor Chivers.
“I was delighted a few years back when at the invitation of myself and the then MLA Cathal Ó hOisín welcomed the Minister for Education John O'Dowd to the very restricted site of the current school and was over the moon when he recognised this and announced a new build,” she explained.
The former Mayor continued: “A new site at Ballyquin Road was then identified and procured and development work began on the proposal.
“Now all that stands in our way is the provision of a wastewater plant, which I don't see as problematic and I sincerely hope that work on the new school will commence as soon as possible.
“I would praise all the good work of pupils, staff, parents and the Board of Governors for all their diligent work to date.”
The school was also asked for a comment on the recent news, however, nothing was received at the time of going to press.