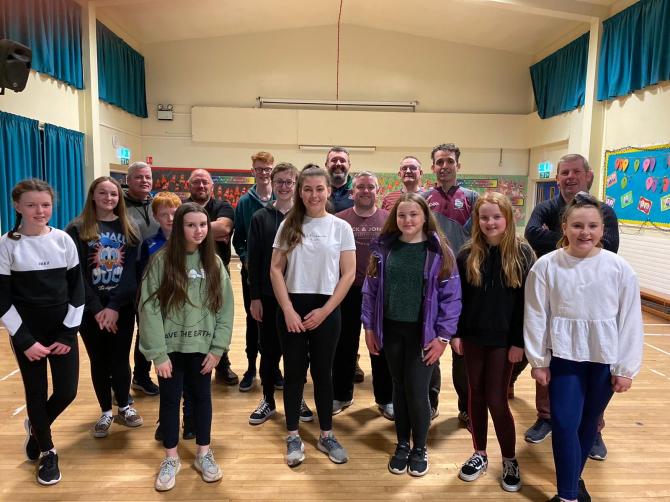 THE loyal volunteers of HOPE Limavady will be bringing their many talents to the stage next month with their very first pantomime.
‘And Her Name Was...’ will take place on three consecutive nights from April 16-18, with talented volunteers performing in front of an already sold-out audience at the Roe Valley Arts and Cultural Centre.
The pantomime is a re-imagining of the story of Finvola, The Gem of the Roe and will see a mixture of singing, dancing, dry wit and lots of other entertaining surprises in store for spectators.
HOPE co-founder and writer/director of ‘And Her Name Was...’ Leo McCloskey, spoke to the Northern Constitution about the purpose of events like this.
He explained: “The whole point behind HOPE is to create a feeling of belonging to something.
“People want to experience a sense of community, that's true everywhere.”
“We live in a time where many people have feelings of isolation and loneliness.
“Lots of people are struggling with mental health issues so we want HOPE to be an avenue for people to connect with each other.”
Leo continued: “Events like this are a bit of craic and lighten the mood.
“We are here to have fun and help other people enjoy themselves.”
Leo concluded:
“We have plenty of talented people people involved with HOPE from children to parents and it's good to be able to showcase this with the pantomime.”
The annual HOPE summer camp sees hundreds of kids enjoying a week filled with sport, outdoor pursuits, art, and music. The summer camp is designed to create a sense of community for all involved with a particular focus paid towards development of personal faith.
2020 will be the eighth year that the camp has taken place in Limavady with other parishes around the County Derry and beyond using the Limavady mould and forming their own unique creation of HOPE.
Those involved with the pantomime have been rehearsing twice a week since January and preparations are in full swing in anticipation for the big performances in store in April.
While many volunteers have experience in past HOPE events of performing in front of a crowd, for many other volunteers the upcoming pantomime will their first time acting or singing in front of a live audience.
16 year-old Cait Colhoun will play the lead role of Finvola and has established herself as a gifted actress with a superb singing voice.
Ciara McElhinney who plays the role of Meabh, Finvola's mother, told the Northern Constitution:
“I've had plenty of experience singing but the acting is totally new. “The rehearsals are always great fun and everybody is working really well together.”
Colin O’Hara, who is playing Wan Gack, the fashion designer of the show, said: “The pantomime has a real family feel to it.
“We’ve got fathers and daughters, fathers and sons and brothers and sisters.
“It makes you want to do your best.”
Colin continued:“Leo puts in a lot of effort and commitment when organising the camp in the summer so a lot of us thought that it would be a good idea to get involved and give something back.
“A lot of us have been involved with past events like Stars in Their Eyes and Jigs and Reels so this is more of the same.”
Aaron McGrotty, who is playing the role of Lord Ronald McDonald told the Northern Constitution: “HOPE is well known in Limavady now, it’s a real community builder and it’s good to have events like this to give HOPE a bit more exposure.
“It’s all good fun too and a bit of craic.”
Gary Lee who is playing Dermot O'Cahan said that the rehearsals have been “a literal pantomime.”
Bosco McDermott plays Artie Garvan and said: “We haven't got long to go until the show starts and I'll be sad when it's all over.
“I look forward to getting down to rehearsals on a Wednesday night.
“It brings everybody together and it's great craic.”
The pantomime is sure to be a great night of entertainment and family fun.
While the performances on Thursday 16 and Friday 17 April are sold out, there are a few tickets still available for Saturday April 18.
Get your tickets now while you still have the chance!