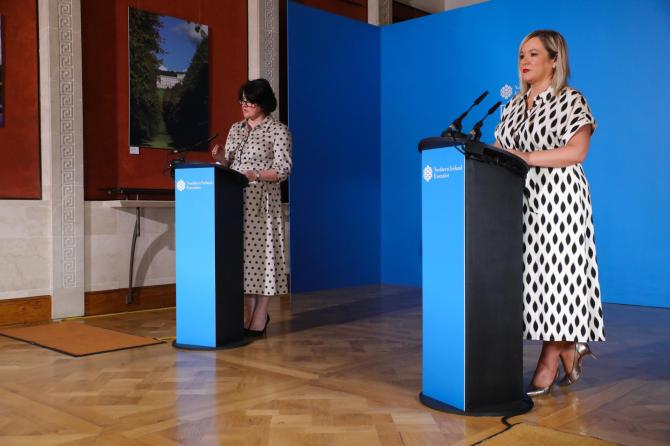 SOCIAL distancing requirements are to be reduced from two metres to one in a bid to save thousands of companies in Northern Ireland, it has been announced.

Restaurant owners and hoteliers, preparing to reopen on July 3, claim the reduction is Stormont's most significant step yet to protect jobs.

First Minister Arlene Foster said a minimum one-metre distance between individuals can be considered 'acceptable in circumstances where appropriate mitigations are made.'

She said the relaxations had been made through the efforts of people to drive down the rate of infection.

Hospitality Ulster chief executive Colin Neill welcomed the announcement, describing it as 'the most significant news' since businesses were forced to close at the beginning of the crisis.

"This makes the difference between a sustainable business and a business that would open and go broke or not open at all and it means we can save jobs," he said.

Guidelines have been put in place to help outlets reopen safely.

Mrs Foster said: "Northern Ireland is opening up again. However, there is an onus on all of us not to ease the fight and vigilance against Covid-19."

She outlined a range of changes to the restrictions, including:

- Places of worship can reopen from June 29

- Hotels and restaurants can reopen from July 3

- Nail parlours and beauty salons will wait until July 6

- Betting shops can reopen from July 3

- Tattoo shops and reflexology can open on July 6

- Leisure centres can reopen on August 7

Other dates for reopening laid out by Deputy First Minister Michelle O'Neill included:

- Seated venues such as bingo halls on July 29

In the past seven days from June 18, there have been four deaths reported.