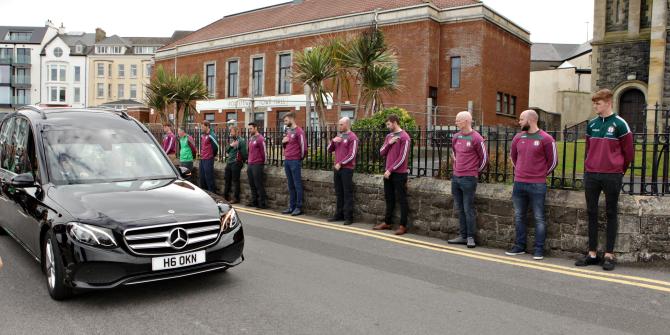 Members of Eoghan Rua GAC form a guard of honour outside Star of the Sea church in Portstewart on Thursday.

THE town of Portstewart came to a standstill on Thursday for the funeral of Michael McQuillan.

Family, friends and club colleagues, wearing club colours, lined the entrance to the Star of the Sea church at The Crescent for the requiem mass.

"'Smicko' took a fierce pride in Eoghan Rua," the club said in a post on social media.

"He was a passionate hurler, playing his part in the club's recennt hurling campaigns in Ulster and the All Ireland series.

"Michael will be sorely missed by his friends and his club mates."

Mr McQuillan is survived by his parents Margaret and Paul and his brother Joseph.

Face masks should be worn in shops, insists Robinson