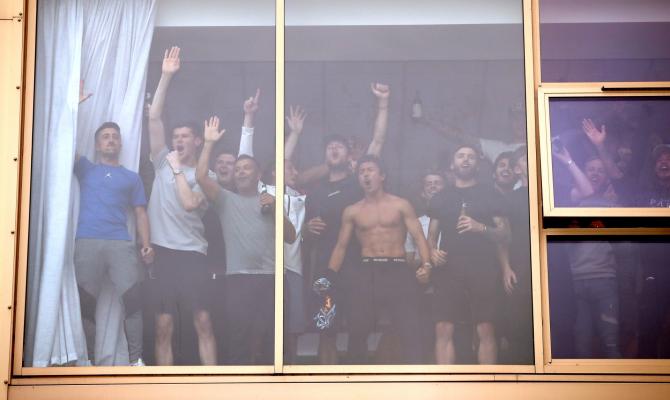 Leeds Utd players celebrate at Elland Road after Huddersfield Town's defeat of WBA saw them promoted back to the Premier League after a 16 year absence.

SIXTEEN years, a host of managers, a catalogue of disasters and Bielsaball - finally, Leeds United are back in the top flight of English football.

Huddersfield Town's shock 2-1 defeat of WBA on Friday night saw Leeds return to the Premier League, without kicking a ball.

They now travel to Derby on Sunday before hosting Charlton in the final game of the season next Wednesday, knowing that two wins will secure them the title.

It would be no less than Marcelo Bielsa's side deserve.

After narrowly missing out last year following defeat to Derby in the play-offs, they regrouped and have been the dominant team in the Championship this season.

Promotion brings to an end almost two decades of hurt at Elland Road where a succession of owners and managers have tried - and failed - to do what the Argentine maestro has done.

'El Loco' has taken a group of players which finished 14th in the league before he joined two years ago and fashioned them into a well-oiled machine with a prodigious work ethic and a genuine love for the club.

The result is a return 'home,' and thoughts of renewing rivalries with some of Leeds' biggest rivals: Man Utd, Chelsea, Arsenal, Liverpool - just some of the clashes Leeds fans can look forward to in the autumn.

For now, though, there will no doubt be some celebrating to do, if the boss allows it.

But the celebrations will be tinged with a little sadness, too, as supporters remember the greats that have passed to their eternal rest during this, the club's centenary season.

Norman Hunter, Trevor Cherry and Jack Charlton - names that have inspired the current generation lucky enough to wear the famous white shirt to write their own glorious chapter in the club's famous history.

It is for them, for the people of Leeds and the proud county of Yorkshire that this day belongs.

And for the countless thousands, millions, around the world whose faith was tested but never died.