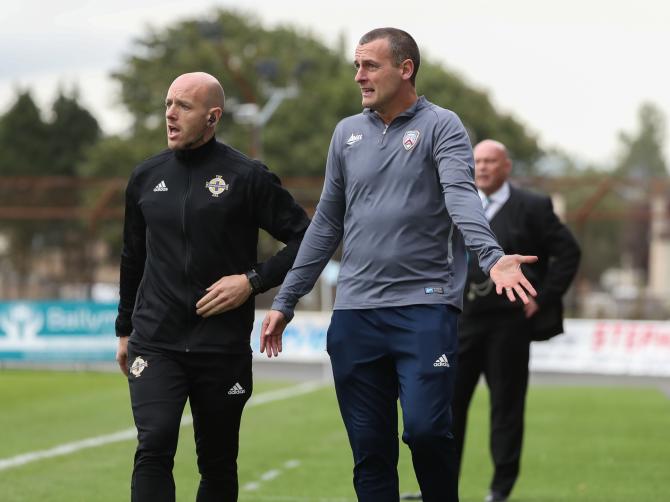 Coleraine and Ballymena Utd meet in the first of the day's semi-finals.

WHEN the Irish Cup semi-finals are played on July 27, it will be the first competitive football in the province in 142 days.

And, as fate would have it, the two semi-final match-ups are a repeat of two of the final round of games played on March 7 before Covid-19 forced a suspension to the domestic season.

On that day, Coleraine travelled to Ballymena and won 2-0 while Cliftonville beat Glentoran 2-0 at the Oval.

Both semi-finals will take place behind closed doors at Windsor Park with the final just four days later at the same venue.

Coleraine are 7/4 favourites with amcleanbookmakers.com to complete a cup double this season after Oran Kearney's side beat Crusaders 2-1 to win the League Cup in February.

Cliftonville and Glentoran are both 5/2 to lift the Sadler's Peaky Blinder Irish Cup with Ballymena the outsiders at 5/1.

The Bannsiders are unbeaten against the Sky Blues this season, winning the last two, while drawing the first meeting of the season 1-1 in Ballymena.

All three games this season have seen exactly two goals scored while under 2.5 total goals has landed in 11 of the last 14 meetings.

There was a spell of three games last season in which these two sides combined for 14 goals with nine of them going Ballymena's way.

However, goals have been an issue for David Jeffrey's side.

Of the four sides remaining in the cup, Ballymena has scored the fewest with six in their three ties.
Glentoran has scored seven, one fewer than the Bannsiders, while Cliftonville has found their opponents' net 11 times, helped by the six they scored against Intermediate side Hanover in the fifth round.

Three of Coleraine's last four wins have come with them leading at half-time.

They have started the second half in their last two derby meetings with a lead so a HT/FT Coleraine double could be a bet worth looking at.

In terms of over 2.5 total goals and 'both teams to score' landing, these two sides don't match up well.

BTTS has not paid out in Ballymena's last three games while it has landed in two of Coleraine's last three.

Five of Ballymena's last six league and cup games have seen two or fewer goals scored while Coleraine's four encounters before their 2-0 derby win prior to lockdown produced a total of three or more goals.

With a place in the Irish Cup final at stake, the first half could be a cautious affair with neither side prepared to take many risks.

If Coleraine are to reach their third final in four seasons, they may have to be patient and wait for the second half to complete a hat-trick of derby wins.

A look at the 17 semi-finals involving the top-flight sides since the 2009/10 season shows that nine have seen under 2.5 total goals scored while both teams to score (BTTS) has also paid out in nine of them.

There may not be too many goals in the second semi-final between Cliftonville and Glentoran.

Under 2.5 total goals has landed in 10 of the last 14 meetings between the two sides, including the last four.

Those four encounters were won to nil with Cliftonville winning three of them.

So there is a chance BTTS will not land again for the fifth successive clash between these two sides.
A draw at half-time might be worth considering. Cliftonville have been level at the interval in their last three matches in the league and cup while Mick McDermott’s side has not led at the break in their last six.

The first goal in semi-finals is always crucial but perhaps more so in this contest.

In the goalscorers markets, Cliftonville's Chris Curran is the only player involved in the semi-finals who has scored in every round so far.

But with three goals, he is not the player with the most goals scored.

That honour goes to Glentoran's Robbie McDaid thanks to a hat-trick in the Glens' 3-2 win at Queens University.

McDaid also scored the winner from the penalty spot two minutes from time in their 2-1 win over 10-man Crusaders to reach the semi-finals.

For Coleraine, Emmett Guckin and Eoin Bradley lead the way with two goals each.

Will we see a repeat of that final at Windsor Park on Friday, July 31?

Charlie Mullan is a sports betting journalist and he is host of the Worth A Punt podcast. His tips can also be found on Twitter @CharliePMullan