Gloves on for LIPS and Leslie 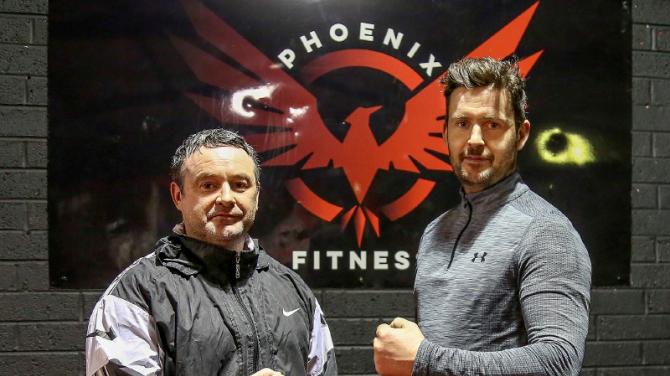 TWO Limavady sporting groups will go toe-to-toe next month in memory of Leslie Steele and to raise money and awareness for mental health.

Phoenix Gym and Roe Rovers will take part in ‘Fists of Steele,’ a charity boxing night bringing the local groups together in aid of valuable local causes.

Named in memory Leslie Steele, who sadly passed away last year, Fists of Steele will take to the canvas on March 30, at the Roe Valley Leisure Centre.

All donations will go towards the forward thinking Limavady Initiative for the Prevention of Suicide (LIPS) and to support Leslie’s family.

Twelve bruising fights are on the boxing card on the night, and the fighters are sure to have the audience on the edge of their seats.

The match between Gerard McKee and Jordan O’Neill is going to be one of the main events and one people wont want to miss.

Each fight consists of three rounds, lasting one minute each, and a professional boxing referee will be present to keep situations under control and ensure safety of the fighters.

The boxers are currently going through an intense 12-week training programme run by Kellz Kelly of Phoenix Gym.

Fights will be judged by well-known boxers King Kane and Dude McCloskey and the experienced Glenn Anderson has been chosen to successfully set up the event.

One of the key sponsors of the charity event is RiverRidge, who were keen to support the two clubs and the cause of the event from the get-go.

There is also an emphasis on making this a cross community event, with boxers across the area coming together to gain a new skill.

Roe Rovers Reserve Manager, Michael Logue said: “Chosen beneficiaries of the night are LIPS along with the Steele family.

“We thought of LIPS, as every year for the past couple of seasons in the North West League, current and past players have taken their own life.

“We thought that we would raise awareness of this issue amongst men and awareness of LIPS and the work they do within the local community.

“These events, especially the ones set up by Glenn, have always been a huge success and fun for all involved.

“The mental health aspect adds a cause to a fun night that we are guaranteeing with some great match ups from local lads that love a punch up and love to compete.”

Ticket prices for the night are £20 and you can purchase them from any Roe Rovers member or Phoenix Gym.

Business packages are also available, where organisations can pay £250 to sponsor the event.

In return, they can get two VIP ringside tickets, drinks reception and digital advertising that goes around the ring.

“Not many people realise that suicide is the single biggest killer of males under 50 in the Wrstern World.

“In NI the figures are especially bad.

“Statistically we are in the top 10 highest rates of suicide in the world.

“Yet rarely do we hear anyone in authority speak abou the problem.

“To say we have a crisis in NI would be an understatement.

“I believe that if the public are aware of the risk of suicide then they will be better equipped to look after their own mental health and the mental health of those around them.

“Most people around them suffer the same issues.

“To be able to openly discuss these issues is for many the first step in saving their lives or assisting their friends and families.

“We hope to encourage the wider population to attend suicide awareness courses where participants will learn some of the signs of people in despair and how to give help.

“Wouldn’t it be great to save someone’s life - but imagine the joy if the life you saved is your own.”