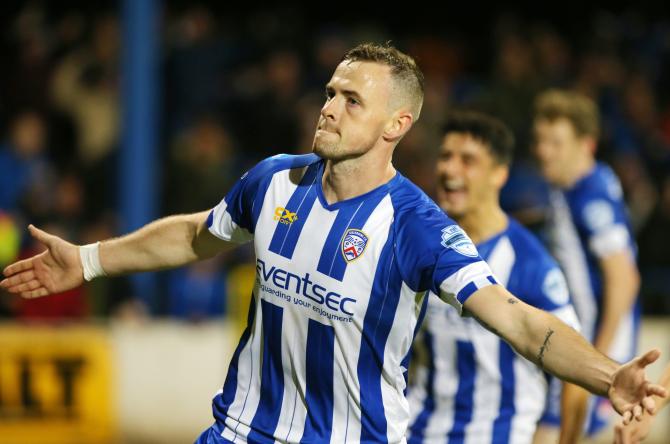 Darren McCauley has signed a two and a half year deal with Scottish club Inverness Caledonian Thistle.

FORMER Coleraine midfielder Darren McCauley claims that he turned down lucrative offers from a number of clubs at home to prove to himself that he could make it as a professional footballer across the water.
McCauley brought to an end weeks of speculation on Friday when he revealed he had signed a two and a half year deal with Scottish Championship club Inverness Caledonian Thistle.
He goes straight into the squad for Saturday's game at Falkirk and is determined to make the most of his opportunity - ten years after joining Glasgow Celtic as a trainee.
"I've been visualising this moment for so long and now it's happening," Darren told The Chronicle on Friday.
"Celtic seems like a lifetime ago to be honest - I was a very different person back then.
"Opportunities like this don't come around too often and I can't wait to get started.
"It's something that I always wanted to do and now my focus is purely on football and my fitness," he added.
It's well known that the 27-year-old held talks with various clubs including Crusaders. Larne and Derry City but in the end it was the challenge of full-time football in Scotland that influenced his decision.
"It's a bit surreal at the moment but I'm just relieved that everything's sorted now," he continued.
"It was one of the most difficult decisions I've ever had to make. Obviously, it's nice at the start when clubs want you but it becomes difficult when you have to decide what's best.
"I sat down and weighed up all my options and in the end it came down to two things - firstly, the Inverness manager John Robertson sold the club to me so well and, secondly, I wanted to test myself as a footballer.
"I know not many footballers take that leap at my age and there is a bit of fear and apprehension there but I have to stay positive and believe in my ability.
"Full-time football is something I've always wanted to do. I felt I was good enough and watching the likes of Brad (Lyons) and others make the move convinced me to have a go at it."
And as for his former team-mates, McCauley says he wishes them well for the remainder of the season.
"It's been a huge transition with players coming and going and it was always going to be difficult for the new manager," he said.
"The club has brought in a few players that'll bring energy to team and I think they'll be okay."