Shiels in line to face Dergview in Irish Cup 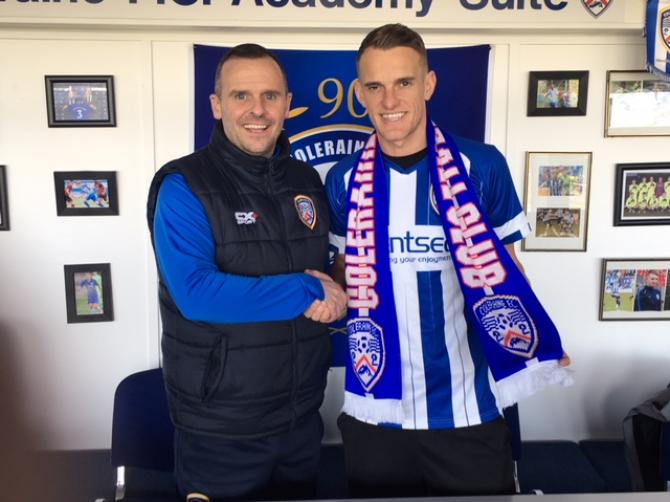 Coleraine manager Rodney McAree welcomes former NI international Dean Shiels to the club after the attacking midfielder signed a one and a year deal with the Bannsiders on Wednesday.Wk06017

COLERAINE transfer signing Dean Shiels is hoping to make his debut for the club in Saturday's Tennent's Irish Cup sixth round tie against Dergview at the Coleraine Showgrounds.

Shiels signed a one and a half year deal on Wednesday to become manager Rodney McAree's sixth signing since succeeding Oran Kearney.

And while he hasn't played a competitive game in weeks, the 33-year-old is confident he is fit enough to play against the Championship club, if selected.

“I've been trying to keep myself fit, but nothing beats games,” said the 14-times capped NI international.

“I'll need a few matches to get going but hopefully I can get some minutes on Saturday.”

If he does play against the county Tyrone minnows, it will represent the end of a long journey for Shiels.

He was a familiar face to Bannsiders' supporters when his father, Kenny, managed the team in the nineties and his family has had a long association with the Showgrounds club.

“I've grown up following the club with my granddad, then my dad as manager and my uncle Sammy playing,” continued Dean.

“I always wanted to play for Coleraine when I was young, it's all I ever wanted to do, so I'm delighted that I can make that happen now. I'm really happy to be here.

“I've got some really good memories and hopefully I can create some memories now as a player.

“I think I've got plenty to offer. I've got experience, I've been round a bit and hopefully I can help the team as best I can.

“There's still a lot to play for. As you can see with certain teams in the league if you go on a run it can lead you right up the table.

“It's all about getting momentum. That comes with hard work on the training ground and I'm keen to try and help as much as I can with that,” added the much travelled attacking midfielder.

The news of Shiels' transfer has been warmly welcomed by supporters and by first team boss Rodney McAree.

“I'm delighted as he brings a terrific career to this point,” said Rodney.

“Dean can play in a midfield three, as a frontman or off the frontman. He can provide a bit of guile, creativity and hopefully goals and it's good to get the deal done.”

For more on this story, see Tuesday's Chronicle.