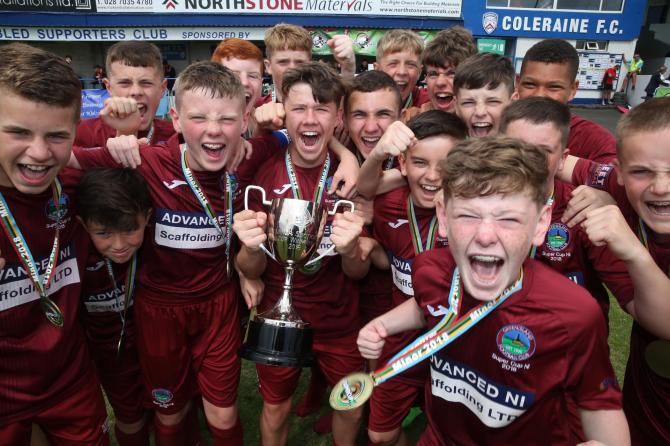 Greenisland celebrating their success at the Super Cup NI.

Following on from the major success of the Minor section in 2018, the organisers behind the STATSports SuperCupNI have expanded the U13 competition to 16 teams.

Thirteen of Northern Ireland’s finest will battle it out with visiting teams to claim the 2019 Minor crown.

Reigning champions Greenisland have returned to the competition as they look to retain their title, while runners-up and local favourites Bertie Peacocks Youth will hope to go one better this year.

The 2018 competition was hailed as a huge success and a number of last year’s entrants have committed themselves once again.

There will also be debut appearances from recently promoted Larne FC, who will be sending their U13 side and they will be joined by neighbours Ballyclare Youth. Completing the list is NIFL Premier League duo Warrenpoint Town FC and Ballymena United FC.

This year's STATSports SuperCupNI will kick off on Monday, July 29, with the traditional parade of teams and opening ceremony in Coleraine the night before.

Finals night at Ballymena Showgrounds is on Friday, August 2.