Return of the Saint 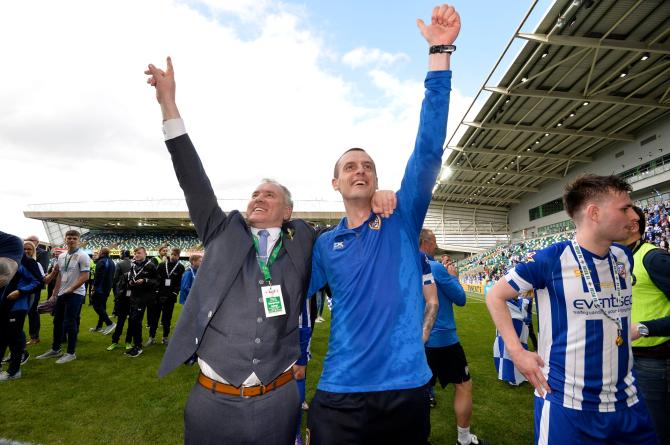 THE management saga at Coleraine FC looks set to finally end this evening as the club has announced this morning that they will be unveiling their new manager later today.

The Bannsiders have been without a manager since Rodney McAree's departure around eight weeks ago. The ex-Fulham midfielder parted ways with Coleraine after a number of indifferent results over the course of last season.

Coleraine Chairman Colin McKendry recently announced that the club had, in the region of, 30 applicants for the vacant manager's position. Former Cliftonville managers Barry Gray and Gerard Lyttle were keen on taking the reigns at The Showgrounds whilst ex-Northern Ireland International Warren Feeney was also rumoured as being keen on taking over at the Ballycastle Road.

After publicly announcing that none of the applicants met what the club desired, Oran Kearney's departure from St. Mirren meant that it looked increasingly likely that the Bannsiders would move for the former Buddies boss. This was later confirmed when McKendry confirmed that Kearney was the club's “number one target”.

Less than a year after departing for Scotland, Kearney looks set to return to the helm of the club which saw him win his first major trophy as a manager after Coleraine's Irish Cup success in 2018.

With all set to be revealed in a matter of hours, The Bannsiders announced on their official Twitter account that they will be announcing their new manager at 6pm and have appealed for supporters to make their way to The Showgrounds for 5.45pm