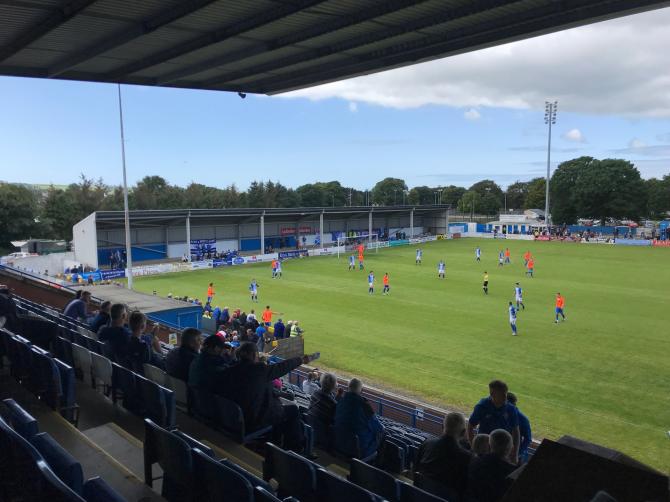 IT PROVED a pleasing return to Scottish shores for recently appointed Coleraine manager Oran Kearney this afternoon as a first half strike from Jamie Glackin was enough for Coleraine to secure their first pre-season win over Stranraer.

The home side enjoyed the first meaningful chance of the game as James Hilton pounced on a loose ball in midfield but the midfielder dragged his effort past the post.

Former Coleraine striker Jordan Allan created Stranraer’s second chance of the game. Now playing at left back, Allan surged forward before firing into the box. Stephen Douglas cleared but the ball broke to the home side’s Leon Murphy but he fired over.

The home side probably should have broken the deadlock on 17 minutes as Adam Cummins climbed highest to nod Allan’s corner towards goal, however, Chris Johns kept his composure and made the save.

Coleraine went ahead in the 22nd minute as Josh Carson launched a great counter attac with a defence splitting pass. Ian Parkhill raced through on goal before squaring the ball across the box to Jamie Glackin and the former Crusaders winger made no mistake with the finish from close range.

Ryan Thomson searched for Stranraer’s equaliser before the break as he picked up the ball outside the box from Ben Doherty’s clearing header. The striker drilled his effort towards goal but his effort was well blocked by Stephen O’Donnell.

Livingston loanee Carlo Pignatiello forced Chris Johns into action before the break but it was Oran Kearney’s men who held a slender advantage at the interval.

Coleraine opted for wholesale changes at the break as Burns, McLaughlin, McConaghie and Whiteside all entered the fray. Almost immediately Aaron Burns carved out a chance but he dragged his effort wide of the post.

Josh Carson tried his luck from a free-kick shortly after but his curling effort from the edge of the box was well saved.

Stranraer appealed for a penalty mid way through the second half as Carlo Pignatiello went down under Ben Doherty’s challenge inside the area. Referee Craig Napier had a good look initially but waved away the appeal in the end.

With just minutes remaining, Coleraine looked to have doubled their lead only to be denied by a great save by Stranraer stopper Dale Burgess. Initially, James McLaughlin released Jamie Glackin who teed up Aaron Burns but the attacker laid the ball into the path of Ben Doherty who watched on as his sweeping effort was saved by Burgess’ outstretched leg.

The home side were awarded a penalty in the 87th minute as Stephen O’Donnell was adjudged to have blocked a shot with his arm inside the area. Up-stepped centre half Adam Cummins but he blazed over the crossbar from 12 yards to complete a perfect afternoon for the Bannsiders.