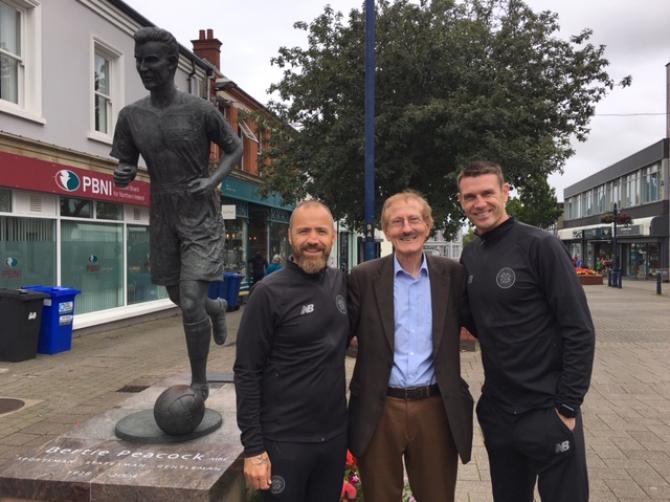 McManus, who made 150 appearances in a seven-year spell with the Hoops, took time out from managing the club's SuperCupNI Premier squad to visit Bertie's statue at The Diamond on Wednesday morning.

The 36-year-old, who also played for Middlesbrough and Bristol City in a career spanning 14 years, admitted Peacock, who later played for and managed Coleraine, remained a legend in the east end of Glasgow.

“It was a great opportunity to come and get a feel for what Bertie Peacock means to the people of Coleraine,” said McManus.

“He's very well thought of back at our football club.

“To make over 300 appearances at any football club is an incredible achievement but to do it at a club like Celtic is special.

“You can see the way the statue is now just how much it means to the people of Coleraine,” he added.

Bertie Peacock spent 12 seasons at Celtic Park between 1949 and 1961 after beginning his career in the Irish League with first Coleraine and then Glentoran.

He became Celtic captain and won one league title, two Scottish Cups and two League Cups during his time in Scotland.

After returning to his native Coleraine, Bertie Peacock helped found the Milk Cup in 1982, pre-cursor to today's SuperCupNI.

To read more of what Stephen McManus had to say about the tournament and the north coast see Tuesday's Chronicle.