Oran Kearney calls for continued support ahead of Linfield clash 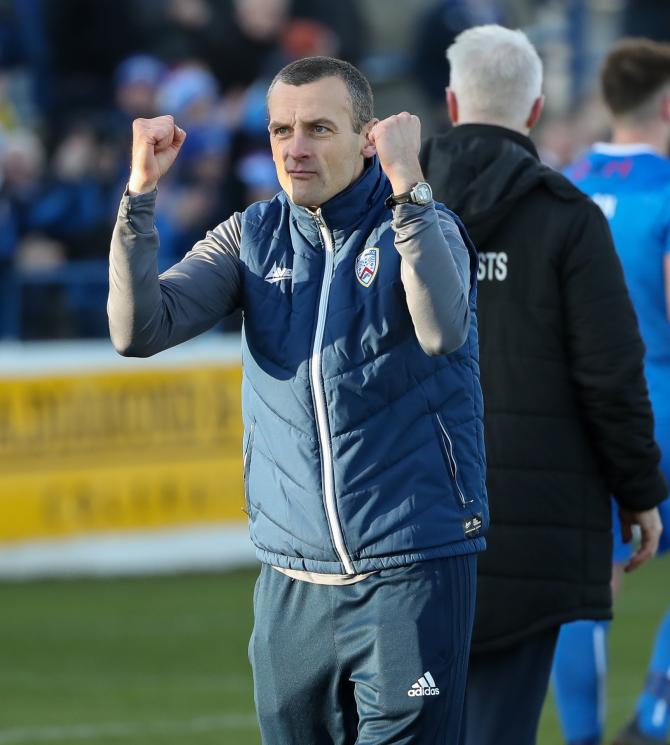 HAVING shelved the success of Boxing Day, Coleraine manager Oran Kearney will already have switched focus to tomorrow afternoon's clash with Linfield at The Showgrounds.

The game will mark the Bannsiders' third game inside seven days in what has proved to be a busy festive period for all clubs in the Danske Bank Premiership. Coleraine's record against David Healy's side this season has been pretty impressive, to say the least, as they have won all three previous meetings against the Blues in the 2019/20 campaign.

With a matter of hours left until the sides clash for the fourth time this season, Kearney says that he is more than aware of the challenge his side face tomorrow afternoon, highlighting the short turnaround of just 44 hours between their latest fixtures.

“Linfield come with an agenda every time, there is big pressure at that club to succeed and one defeat can be a catastrophe there so we are well aware of Linfield at the best of times,” the Coleraine boss explained after the victory against bitter rivals Ballymena United.

“It was literally the quickest debrief afterwards; eat the pizza, get the milkshake in, jelly babies, ice baths and everything else that goes with it.

“The only thing we can take out of it is the fact that it is the same for Linfield and all teams (in the league).

“There is no point standing here crying about being stiff or sore or anything else because it will be the same for all players in the league,” Kearney explained.

“You're hoping the 48 hours recovery happens a little bit easier and quicker with three points and you're hoping that little bit of adrenaline is still there and we can recover quickly and get ready for another big one on Saturday.”

The atmosphere at The Showgrounds on Boxing Day was undoubtedly the best of the season. Kearney heaped praise on the Coleraine supporters adding that he is hoping for more of the same on Saturday afternoon.

“The atmosphere was electric. It was brilliant and it is everything that you want around the town and the club and hopefully we can get the same again on Saturday,” he said.

Reflecting on that unblemished record against Linfield this season, it sure does make for good reading if you are a Coleraine fan.

In the opening league clash between the sides back in August Coleraine emerged 4-2 victors at Windsor Park as goals from Ben Doherty, a Ryan McGivern OG, a Stephen O'Donnell header and a late strike from Emmet McGuckin secured the victory.

Coleraine hosted Linfield again back in October with a similar outcome in a nip and tuck affair at the Ballycastle Road. The Bannsiders were celebrating once again as Mark Stafford turned into his own net seven minutes from time to secure the victory.

Arguably the result which will live longest in the memory for many supporters was the emphatic 3-0 victory Coleraine enjoyed at Windsor Park in the BetMcLean League Cup earlier this month.

As ever, you can read the full reaction to the Festive football inside next week's Chronicle which will be in the shops on Tuesday morning.