It's good to be back!

Coleraine players back in training ahead of busy end to month 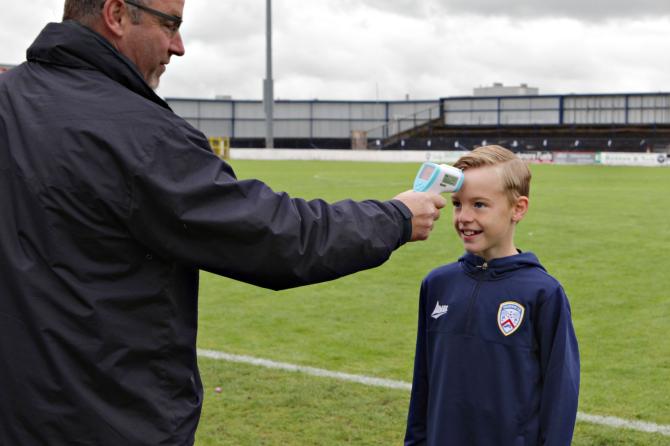 Luca Kearney, son of Coleraine manager Oran, gets his temperature tested as part of new guidelines as the club returns to training.

BANNSIDERS boss Oran Kearney has said it is great to be back training as a squad again after three months of a break.
Coleraine players and management returned to training last week as they prepare for the impending Sadlers Peaky Blinders Irish Cup semi-final against Ballymena Utd.
And the manager was delighted to report that everyone returned to collective training in good shape following lockdown imposed by the coronavirus pandemic.
Even if it all takes a little bit of getting used to.
“Yeah, there’s lots of new things to contend with, plenty of hoops to jump through, and while it is a bit strange you just have to get on with it,” he said.
“All the boys arrived back in great shape considering the length of time we were off.
“The normal summer break is about six weeks - this has been double that - so I’m delighted with how the boys returned,” he added.
The squad will gradually build up the intensity of sessions as the Irish Cup semi-final approaches.
“We’ve got to be careful going forward and that is why dialogue with the players is so important,” continued the manager.
“They all want to train but prevention is better than cure so we have to exercise caution, particularly with the older players.
“The focus will shift as we go along but for the moment it’s just nice to see everybody again, it’s good to be back.”