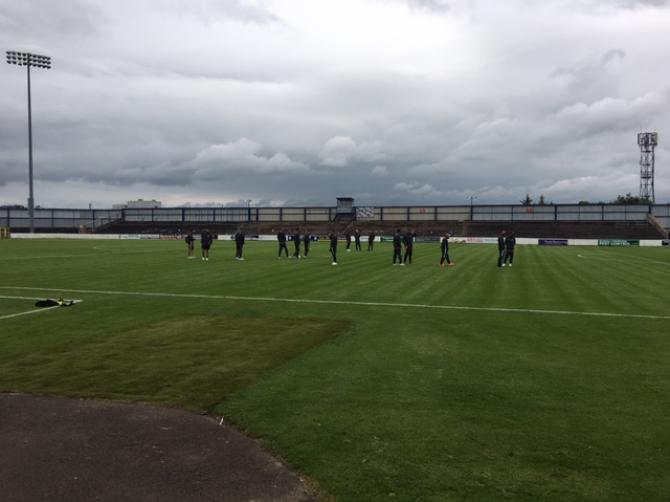 La Fioita players on the Showgrounds pitch on Wednesday evening.

NICOLA Berardi, coach of Coleraine's Europa League opponents, La Fiorita, admits he expects a physical match when the two clubs meet in the Europa League preliminary round this evening (Thursday).

The San Marino side flew into Northern Ireland on Wednesday morning and spent an hour training on the Showgrounds pitch on Wednesday evening.

The squad has been together training for three weeks in preparation for the European tie, with the coach expressing his satisfaction at the response of the players amid a global pandemic.

“The difficulty was to understand how much it was possible to push in training taking into consideration the stop of over four months for Covid," the coach, who only returned to the club in the summer, told the club's website.

"We didn't know what the kids would look like physically and we had to figure out how to dose the workloads. I must say that everyone showed up in good condition.

"With the trainer, we set up the first training sessions focused on the athletic side, then we concentrated on the tactical and technical level. We worked well.

"There is a nice mix between more experienced players and young players who have brought enthusiasm, run a lot and allow us to do more intense training.

"It's an important squad and I'm happy to train it. We have gained in terms of physical strength but, on the other hand, we lose a little in experience, which is very important in these matches.

“We will play, at least at the start, with a 4-3-3. We have prepared a game that is not only defensive, this is a match in which you can try to do something also in an offensive key, obviously with all the covers to try to limit their game.

“These Anglo-Saxon school teams are easier to deal with than others, which are more technical. Theirs is a very physical game, usually set on the classic 4-4-2, looking for high balls.

"We have seen a lot of videos of our opponents and they play like this. With a bit of skill and balance on the pitch, they are easier matches to play," he added.

This evening's game has a 7.45pm kick-off and will be played behind closed doors.

However, the action will be streamed on the BBC Sport website.