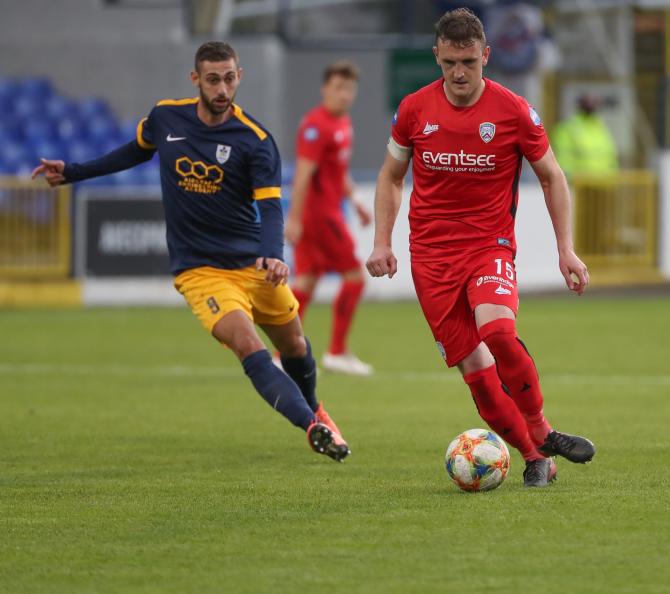 Coleraine captain Stephen O'Donnell, in action against La Fiorita of San Marino in the preliminary round.

SPEND any time in the company of Coleraine captain Stephen O'Donnell and you get a sense of why he and his team-mates can produce the sort of result they did against NK Maribor in the previous round of the Europa League.

A recent conversation I had with the skipper as part of preparations for Thursday evening's second round game against Motherwell was liberally peppered with the words 'hard work,' evidently the key to the team's recent successes.

And the big Derryman is calling for more of the same tomorrow evening as the Bannsiders look to rewrite the history books by winning a third European game in the same season.

"It's one of them ones where we'll have to put in the same amount of effort as we did against Maribor if we want to get through," said the 28-year-old.

"We know it's going to be extremely tough but you've got to enjoy the challenges, the hard work and intensity.

"These are the sort of games as players that you want to be involved in and, to be honest, you wouldn't want to be anywhere else at this stage.

"The Irish League will look after itself; for now we want to enjoy challenging ourselves against top teams and see where that takes us," he added.

"Hard work and graft has got us to where we're at but we won't get carried away or get above our station.

"If we drop our levels at all we'll come unstuck but we have a good group here, so we'll stay focused and be ready for the challenge on Thursday."

Like many in the Coleraine changing room, Stephen is familiar with Scottish football, which gives them a slight advantage when it comes to knowing what to expect.

"Yes, there's more information available for this game than there was for Maribor, but that doesn't make it any easier," he continued.

"The players will be a bit more familiar, which is a good thing, but the flip side is that Motherwell will know plenty about us too.

"They also had a bit of a scare against Glentoran in the previous round which might have acted as a wake-up call to them.

"They won their first league game of the season last weekend so they'll be coming here looking to string a couple of results together.

"But that doesn't change our game plan: we know what we have to do if we want progress."