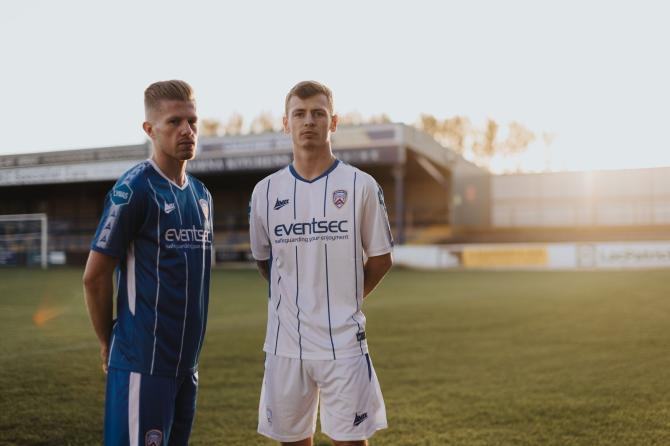 Coleraine players Lyndon Kane and Stewart Nixon model the new home and away kits for the forthcoming season.

WITH just over a week to go until the start of the /2020-21 Danske Bank Premiership season, Coleraine FC has launched the club's striking new kit.

Designed in conjunction with manufacturers Avec Sport, the new home kit takes its inspiration from the club's iconic shirt of the mid nineties period.

Predominately blue, the shirt is completed with white pin stripes and a white collar.

In contrast, the club's new away top is the opposite - predominately white with blue pin stripes and blue collar.

The Club Shop will have sizes from 0-3 months right up to XXL available in store, with prices set at £45 adults and £35 children.

It will be open exclusively at 10am tomorrow morning (Saturday) for an hour for those who signed up to the Coleraine FC Newsletter and will then fully open from 11am to 3pm.

The Shop will also open its doors next Wednesday, Thursday and Friday from 12pm to 5pm, as well as the following Saturday from 11am to 3pm.

The Bannsiders begin the new league campaign at home to Ballymena United next Saturday (October 17).