Oran looking forward to getting up and running 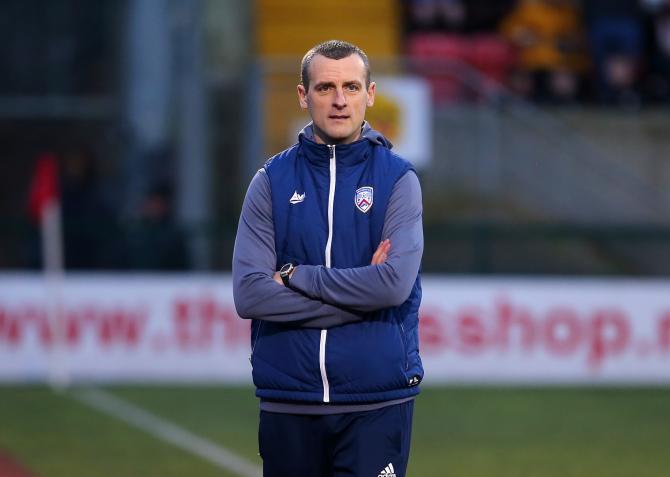 FRIDAY night, under the lights, Coleraine and Ballymena Utd meet.

In ordinary times, it is a match-up which would draw thousands to the Ballycastle Road.

The old ground would be rocking from early doors in anticipation of the latest in the series of clashes.

But these are far from ordinary times.

On a night when the province enters a period of almost semi-lockdown, with bars and restaurants forced to close, just 500 lucky supporters or so will be in attendance.

And so it will fall on them to create some atmosphere for those watching on BBC Sport NI live stream.

"It's definitely surreal for everyone," admits Coleraine manager Oran Kearney.

"Derby games are sometimes over hyped but that's maybe not true this time given the circumstances we find ourelves in.

"I suppose we had a bit of a dry run with the Irish Cup semi-final back in the summer but this will be a totally different game, requiring a different mindset."

Coleraine quickly made up for the disappointment of that Windsor Park defeat with a glorious run in Europe which only ended in a penalty shoot-out defeat to SLP club Motherwell.

They then made it through a couple of rounds of the Eventsec North West Cup before bowing out to Dergview.

That game was a fortnight ago now and the team's last competitive outing as a friendly against Ballinamallard was cancelled last Saturday.

"We purposefully didn't take a game last weekend as we felt we had enough games behind us," explains Oran.

"Instead, we've enjoyed four or five good training sessions where the boys have looked really sharp.

"Hopefully, that will leave them itching for a game come Friday night."

A number of Coleraine players are in line to make their league debuts on Friday, among them goalkeeper Gareth Deane, defender Ronan Wilson and midfielder Evan Tweed, while Howard Beverland and Curtis Allen could make a second debut after returning to the club during the summer.

Opponents Ballymena Utd also boast a number of changes from last season, with seven players exiting the Showgrounds and six players being brought in by David Jeffrey and Brian McLaughlin.

"Yes, there are changes on both teams but, thankfully, we're quite settled as a team," says Oran.

"It might be a first derby for a number of Ballymena players and hopefully that is something we can take advantage of.

"To be honest, it's just nice to get up and running again.

"Hopefully we get a good performance and take it from there."