Oran Kearney named Manager of the Year for 2019-20 season 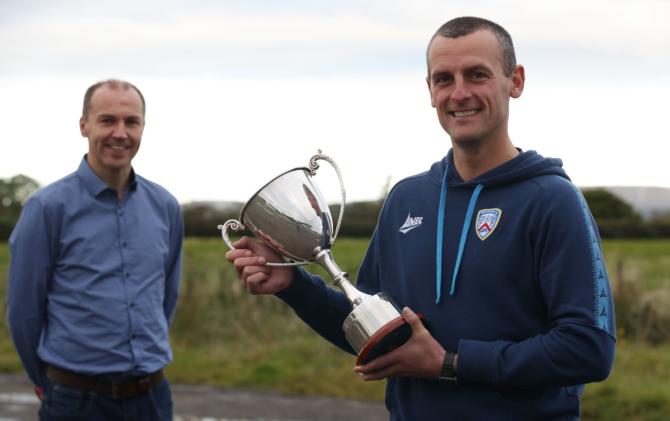 COLERAINE manager Oran Kearney will start the new season with an extra spring in his step after being named as NI Football Awards Manager of the Year for 2019-20.

The award comes after further trophy success for the Bannsiders, after winning the BetMcLean League Cup in February, just a matter of weeks before the season came to an abrupt halt.

At that time Coleraine were just four points behind leaders Linfield in the title race with seven games to go – one of which was against the Blues – and later lost their Irish Cup semi-final to local rivals Ballymena United on penalties.

“The position we were in and the momentum we had we had big hopes of trying to go and push, but we will never know the answer to that,” said Kearney.

“I was shocked probably more than anything else to get this award, but very proud as well.

“I remember starring out as a young manager and then moving to Coleraine and going to the awards dinner every year. It was lovely as a player to get into the Team of the Year, but as a manager when that prize is there you always looked at it and though that it would be nice someday to get your hands on that.

“To put my hands on it again is fantastic and while I know it’s an old cliche it only happens with the hard work of a phenomenal amount of people around the club.

“It’s great to stand and hold the trophy, but it is a big testament to everybody whose work rate and commitment has been fantastic and it’s a big reward for them all.”

It is the second time that Kearney has won the Manager of the Year award, having been the recipient in 2018 after leading Coleraine to Irish Cup success and a second-place finish in the league, losing out to Crusaders by just two points.

Now Kearney, whose team will kick-off the Premiership season tonight with a glamour derby against Ballymena United, is already setting his sights on winning the Manager of the Year back-to-back because that will mean it’s been another successful campaign for the Bannsiders.

“As great as it is to get the trophy you normally don’t get it as close to the next season starting, so all eyes will quickly turn to try to focus and get going again for this season,” he said.

“It’s not the last time I want to put my hands on it because it’s a sign that your club is in a good position all-round and if we’re holding the trophy again next season it’ll mean we’ve had a good season.”