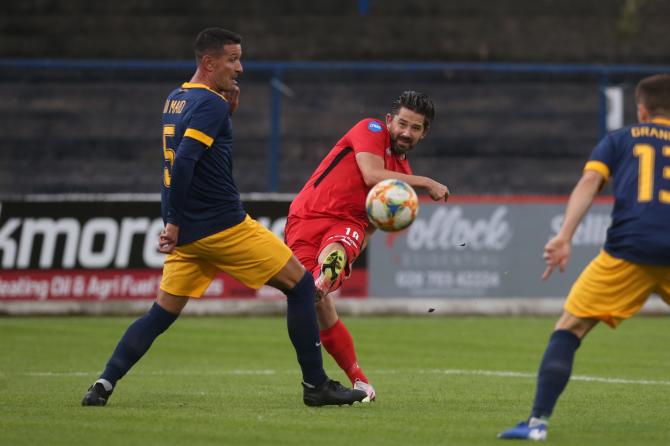 Curtis Allen and his team-mates face Ballymena Utd in the season opener on Friday evening.

DOES it even feel like the start of a new football season?

To be honest, probably not.

Not when there are so many questions hanging in the air, just hours before kick-off on the opening game of the weekend.

Coleraine at home to Ballymena Utd, a game which, in normal circumstances, could reasonably be expected to pull in a gate of around 3,000 people.

This evening, the host club will be lucky to see 500 punters through the gates.

That is the number of tickets the club sold on the back of official guidance which, incredibly, came under scrutiny late on Friday afternoon.

The latest rumours coming suggested that not everything was as it should be, in terms of signing off on permission for supporters to attend what are dubbed 'elite' sports events.

That led to some frantic messaging between fans on social media, unsure as to whether they would be allowed to attend or not.

Whatever way you look at it, it's a shabby start to what, on paper, should be one of the most exciting league campaigns in years.

Whether we get to see it through to a climax would be my concern.

NIFL officials have placed on record their fears that clubs will go under unless financial help is forthcoming, either from the IFA or the executive.

How can they survive?

Coleraine, for example, will lose a small fortune on Friday night's game against their bitter rivals - it's estimated anywhere in the region of up to £50,000 between gate receipts, bar takings and merchandise sales.

Glentoran visit next weekend. It'll be a similar story.

Meantime, all the while, players need paid. Management too. Plus other club employees.

I'm no mathematician but even I can work out that that doesn't add up.

What I do know is that we're all gonna be short-changed in the short-term at least.