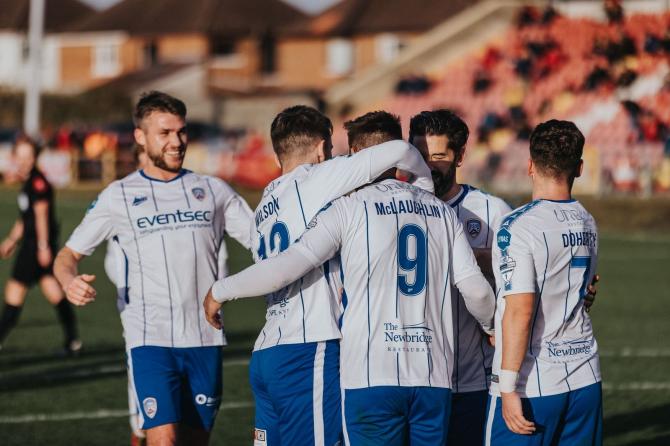 Coleraine enjoyed a first win of the season at Portadown a week ago.

COLERAINE host Glentoran at The Showgrounds this Saturday afternoon as this strange season continues.

The Bannsiders are on three points from their opening two games, two points better off than their opponents who have just a single point to show for their efforts thus far.

That will not please visiting manager Mick McDermott who invested heavily in his squad during the summer.

His opposite number, Oran Kearney, was also active in the transfer market, perhaps not to the same extent.

Indeed, some of the signings have played their part in the opening fixtures of the campaign, none moreso than impressive midfielder Evan Tweed.

The former Institute man has settled in well alongside Stephen Lowry in the centre of the pitch, helping to assuage the disappointment caused by the absence of Aaron Jarvis.

Saturday's game marks another one of the six game suspension imposed on striker Eoin Bradley and may have come too early for a number of the club's injured players.

The aforementioned Jarvis is continuing to train on his way back from a shoulder injury while Aaron Traynor returned to training during the week.

Several others, however, may be out for a little bit longer, including defender Howard Beverland.

“It will be an exciting game,” said Oran of Saturday's game against the Glens.

“The key thing for us was to bounce back and show that bit of steel after the Ballymena defeat.

“I said to the players before the Portadown game that it’s easy to churn out performances when you’re on a run of results.

“But, when questions are asked, it’s important you come out roaring and show a bit of strength.

“The result against the Ports was very pleasing but the manner of the win is what encourage me more than anything,” he added.

The live stream will be produced by camera operators from Coleraine FC but 247.tv will be hosting the stream on behalf of the club. Supporters can watch the live action for £7, or catch up on the replay for £3.

The production will include interviews and features, instant replays, match graphics and a co-commentator every week.

The match commentator will be Barry Greene who has had years experience working for the BBC and Virgin Sport.