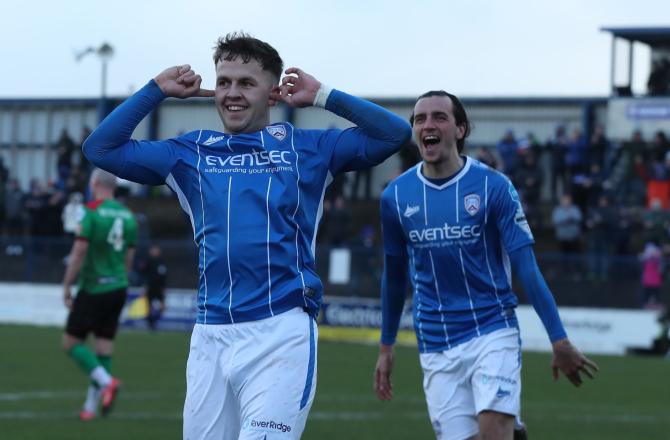 COLERAINE’S influential midfielder Ben Doherty says he is relishing a trip to face his former club Glenavon when the Bannsiders make the trip to Mourneview Park on Saturday (KO 3pm)
Doherty has been at the heart of all things good for Coleraine so far in the 2020/21 Danske Bank Premiership campaign. The former Derry City youngster currently tops the Bannsiders' scoring charts having netted twice already in the league against Portadown and Glentoran respectively.
Doherty’s goal scoring form seems to have continued following a memorable summer which witnessed the 23-year-old impress on the European stage with stellar performances against Sammarinese outfit La Fiorita, Slovenia's NK Maribor and Scottish giants Motherwell as the Bannsiders created history in the Europa League qualifying rounds.
With the European exploits well and truly shelved, it is fair to say that Doherty is riding the crest of a wave at present as he recently signed a lucrative two-year contract extension which will see him stay at the Ballycastle Road until June 2023.
However, despite a busy few weeks off the field for Doherty, the modest midfielder insists that his sole focus is on picking up another three points this weekend as the Bannsiders bid for their third win on the bounce when they visit the Orchard County this weekend.
Speaking to Chronicle Sport, Ben said: “Glenavon will be another tough test because their confidence will have been up after their result with Glentoran with nine men and then a draw last weekend, but we will look forward to it.
“They didn't concede against Dungannon Swifts last weekend so they will be going into the game full of confidence.
“Mourneview Park is always a great place to go and play and hopefully we can impose our style of play on them and pick up another three points on the road,” admits the 23-year-old.
Despite being on the books of Coleraine, Doherty provided a hat tip to his former club ahead of the upcoming fixture as it was Glenavon who handed the Foyleside native his Irish League debut back in the 2018/19 season when he joined Gary Hamilton's side on loan from Derry City.
Doherty went on to make several appearances for the Lurgan Blues before joining the Bannsiders under Rodney McAree's stewardship in January 2019 and despite moulding himself into a first team regular at Coleraine he insists he has a lot of respect for his former club.
“I love going back there because Glenavon were good to me, Gary Hamilton was good to me, it is where I started off in the Irish League,” says Doherty.
“I compare the club to Coleraine in the sense that it is a family club and you are well looked after but hopefully we can get the result this weekend.”