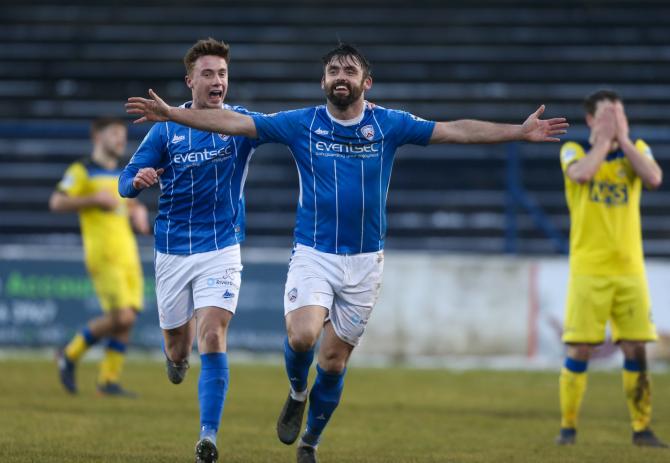 COLERAINE continued their fine recent run of form with a deserved 2-0 home win over Dungannon Swifts on Saturday.

Goals from Aaron Jarvis and Eoin Bradley made it four wins on the bounce for the Bannsiders who move to within a point of Ballymena in the Danske Bank Premiership table.

Oran Kearney's men dominated the opening 45 minutes and the manager will have been frustrated not to go in further ahead at the break.

All they had to show for their efforts was a first goal of the season for midfielder Jarvis who has endured a stop-start season due to injury.

The visitors were much improved after the interval and came close to levelling through Rhyss Campbell midway through the second half.

He was denied by a superb reflex save from Gareth Deane who again proved his worth to the team's resurgence with a fourth consecutive clean sheet.

The importance of the save was underlined in the game's latter stages when Eoin Bradley scored a tremendous goal to seal the points.

There appeared to be little on when the ball broke to the big Kilrea man on the edge of the Dungannon penalty area but 'Skinner' produced an unstoppable volley with his supposedly weaker right foot to double his side's advantage.

Coleraine are next in action on Tuesday night when they travel to Inver Park to face Larne, who drew 3-3 with Crusaders earlier in the day.

They will travel with confidence, knowing that while they won handily enough in the end they can perform better.