Kenny Shiels' side take on England at St. George's Park 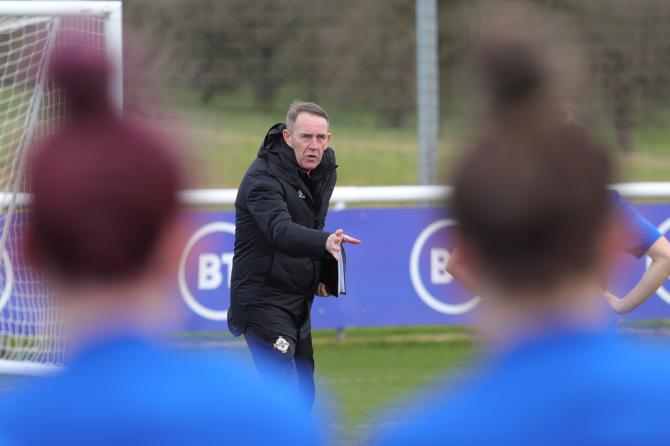 COLERAINE'S Lauren Wade admits she and her NI Women team-mates are excited about the challenge of facing England at St George's Park on Tuesday.

Wade is joined in the team by fellow Coleraine girl Chloe McCarron while the side is managed by former Bannsiders' boss Kenny Shiels, ably assisted by his son Dean, who hadief spell at the Showgrounds last season.

They are due to take on the Lionesses at lunchtime in what will be their only wwarm-up game before April's Euro 2022 play-off.

A 5-1 victory over the Faroe Islands at the start of December completed a four-match winning run for Northern Ireland in their Euro qualifying group, and saw them make history by securing a place in the Euro play-offs for the first time.

They do not know their play-off opponents yet and manager Shiels has spoken about the importance of the performance against England as he prepares his squad for April.

Speaking to BBC Sport NI Wade, a grandaughter of former Coleraine FC chairman Hugh Wade, admitted the group was excited about the game against one of the game's highest ranked teams.

"We are under no illusions, playing England is a challenge but this is why we play the game - we want to challenge ourselves at the highest level," said Lauren.

"I think we are fearless and excited to be playing England. Of course, as a player you have those little nerves before a game, that is just normal, but everyone is here to play the best they can against some of the best players in the world.

"We have created history by reaching the Euro play-offs but this is going to test how far we have come as a team, and we are all really excited for the challenge," she added.

Wade is currently on the lookout for a new club after leaving Glasgow City but believes a confident display against England will put her and colleagues in the shop window when it comes to the future.

* Tuesday's international friendly between England and Northern Ireland has a 12.30pm kick-off at St. George's Park and can be watched live on the BBC Sport website and on the BBC iPlayer.