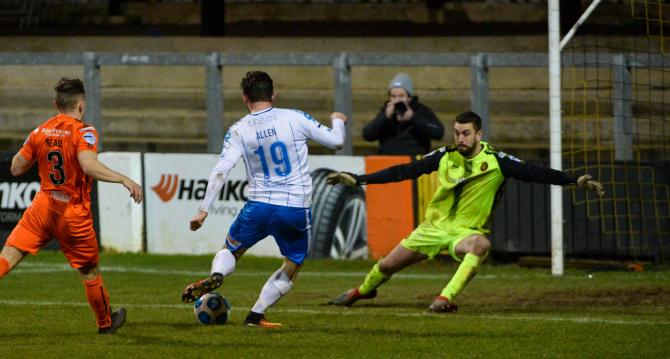 CURTIS Allen at his brilliant best.

That was the story of Coleraine's 2-0 win at Carrick Rangers on Tuesday night.

With the game finely poised, Allen showed all his poacher's instinct to score twice in the second half to secure a vital win for the visitors.

On both occasions, the 33-year-old, who celebrated his birthday on Monday, displayed nerves of steel to find the net when most needed.

The result sees Coleraine stretch their unbeaten run to 11 games, a sequence of results which has seen them climb to third in the Danske Bank Premiership table.

Indeed, Curtis could have walked away with the match ball but for an assistant's flag denying him a goal in the first half.

It was one of few chances created in a hard-fought 45 minutes in weather conditions and on a pitch much better than anyone could have hoped for given the forecast.

Scoreless at the break, Bannsiders' boss Oran Kearney moved swiftly to change his set-up at the start of the second half, replacing Stewart Nixon with Matthew Shevlin, and the move paid dividends.

The former Ballymena Utd and Linfield forward added extra impetus to Coleraine's attacking play, having a part to play in Nixon's brace.

But this win owed everything to a determined team performance.

Goalkeeper Marty Smyth was composed throughout and produced a tremendous double save in the dying minutes to preserve the clean sheet.

The defence never looked giving up a goal, even after captain Stephen O'Donnell was forced off injured to be replaced by Gareth McConaghie.

Jamie Glackin was at times unplayable, particularly in the first half.

Carrick defenders resorted to foul means in their efforts to curtail him, such was the Omagh an's influence on the game.

Up front, Allen demonstrated just why Oran was so keen to bring him back to the club.

More of the same on Saturday against Warrenpoint Town would be more than welcome.