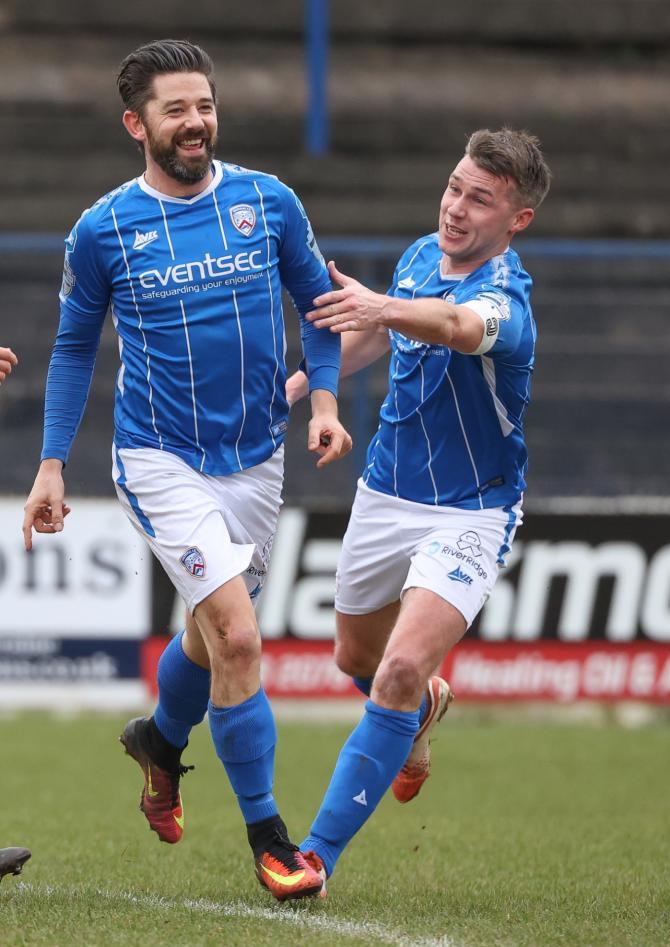 Stephen Lowry rushes to congratulate Curtis Allen after the striker scored in the win over Warrenpoint Town.

CURTIS Allen picked up where he left off in midweek by helping himself to a brace of goals in Saturday's 2-1 defeat of Warrenpoint Town.

The 33-year-old scored twice in Tuesday's win over Carrick Rangers and he repeated the dose four days later in a hard earned win for the Bannsiders.

The border club, without a game since mid February, started brightly but were rocked when Allen struck for the opening goal after just ten minutes.

The Ballymoney man, marking his 250th appearance in a Striped shirt, delivered an inviting ball to the back post and Allen did the rest, directing the ball past Town keeper Gabriel Sava.

Midway through the half, Allen double his side's lead, showing great awareness to control a Parkhill shot before swivelling and firing a shot high into the roof of the net.

But if Coleraine thought they were in for a comfortable afternoon they were reminded that there are no easy games in this league.

Fra McCaffrey got on the end of a Jake O'Connor delivery on the half hour to make it 2-1 and that was how it stayed at half-time.

The second half was devoid of the goals of the opening 45 minutes, largely down to the heroics of Gareth Deane who somehow prevented Adam Evans from levelling in a frantic couple of moments.

Coleraine were made to work hard to preserve their lead in the closing stages but they managed to hold on to win all three points and stretch their unbeaten run to 12 games.

Next up for Coleraine in this most frantic of seasons is a home game against Portadown on Tuesday evening.

The sides drew 1-1 at Ballycastle Road just a matter of weeks ago when the Bannsiders will be disappointed not to have clinched all three points.

On Friday night, Linfield defeated Larne 2-1 in the game of the weekend.

What that all means is that the Blues lead the way with 42 points from 20 games played, five ahead of second-placed Coleraine on 37 points from their 20 games.

Larne are in third, a point behind Coleraine with the same number of games played, with Cliftonville a point behind them on 35 but having played two games more.

Crusaders are the weekend's big losers, dropping from second place to fifth following their home defeat to Glenavon.

Glentoran are in sixth place following a recent good run of results.

All the teams are back in action on Tuesday when top billing goes to the clash of Glentoran and Linfield at the Oval. The sides met a week ago at Windsor, a game the Glens won 1-0.

Glenavon host Carrick, Ballymena and Cliftonville meet at the Warden Street Showgrounds, Warrenpoint Town and Dungannon Swifts clash at Milltown while Larne and Crusaders do battle at Inver Park.

Coleraine, of course, host Portadown on a night when league positions could change yet again.