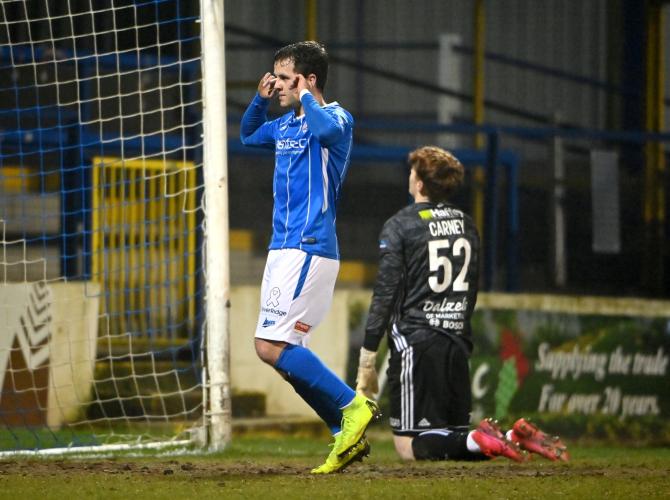 Ben Doherty scored a penalty in each half to secure a 2-0 win for Coleraine over Portadown on Tuesday night.

COLERAINE moved to within two points of league leaders Linfield with a 2-0 win over Portadown at the Showgrounds on Tuesday night.

Ben Doherty, just back from two months out injured, was the hero for the hosts, scoring a penalty in each half to secure the three points.

The scoreline is harsh on the visitors who created a number of good openings, especially in the opening half, but failed to take their chances.

Their opponents, in contrast, and like all good teams do, took theirs.

The Ports had already threatened when referee Ross Dunlop awarded Coleraine a penalty midway through the first half.

Ben Doherty, making his first start in over eight weeks since breaking his collar bone, accepted the responsibility and showed nerves of steel to blast the ball past Jacob Carney and into the corner of the goal.

Oran Kearney would have been relieved to get his men in at the break, given that Adam Salley and Lee Bonis had squandered a number of good openings in that opening 45 minutes.

No doubt the manager and his staff would have had a word with the players during the break and, to be fair, they did look a more settled unit on their reappearance.

Still, the game remained firmly in the melting point until 20 minutes from time when Dunlop pointed to the spot for a second time.

This time, Eoin Bradley appeared to be dragged down in the box, though the Portadown players begged to differ with the match official.

Ben Doherty blanked out all the noise and fired the ball low down the middle of the goal to double his and his team's advantage.

With subs Bradley and Jamie Glackin, on for Curtis Allen and Matthew Shevlin, showing all their experience, Coleraine were able to see the game to its conclusion without any major drama.

So it's another game chalked off in this strangest of seasons as the Bannsiders moved on to 40 points from their 21 games played.

They are now just two points behind the Blues who have 42 points from 21 games. David Healy's side suffered a heavy 3-1 defeat against Glentoran at the Oval on Tuesday, their second loss to their great rivals in the space of a week.

Crusaders have moved back up into third place, courtesy of a thumping 3-0 win away at Larne, and are on 36 points, four behind Coleraine having played the same number of games.

Larne are in fourth, again on 36 points, but with a worse goal difference than the Crues, with Cliftonville also on 36 points in fifth. They led for a long way against Ballymena Utd but a late equaliser for David Jeffrey's side saw them drop two points.

In the remaining games on Tuesday, Glenavon and Carrick Rangers drew 1-1 while Warrenpoint Town defeated Dungannon Swifts 4-1 at Milltown.

Glentoran are in sixth place on 33 points but with two games on hand on most of the teams above them.

There is no let-up for any of the teams with a full round of games scheduled for this weekend.

The action starts on Friday night with the meeting of Carrick Rangers and Glentoran at the Belfast Loughshore Arena and continues with some big games on Saturday.

Linfield will be desperate to get back to winning ways when they entertain Cliftonville at Windsor Park while second-placed Coleraine travel to play Dungannon Swifts at Stangmore Park.

Portadown and Glenavon meet in the mid-Ulster derby, Crusaders host Warrenpoint Town while there is a Mid and East Antrim derby at Ballymena where the home side meet Larne.