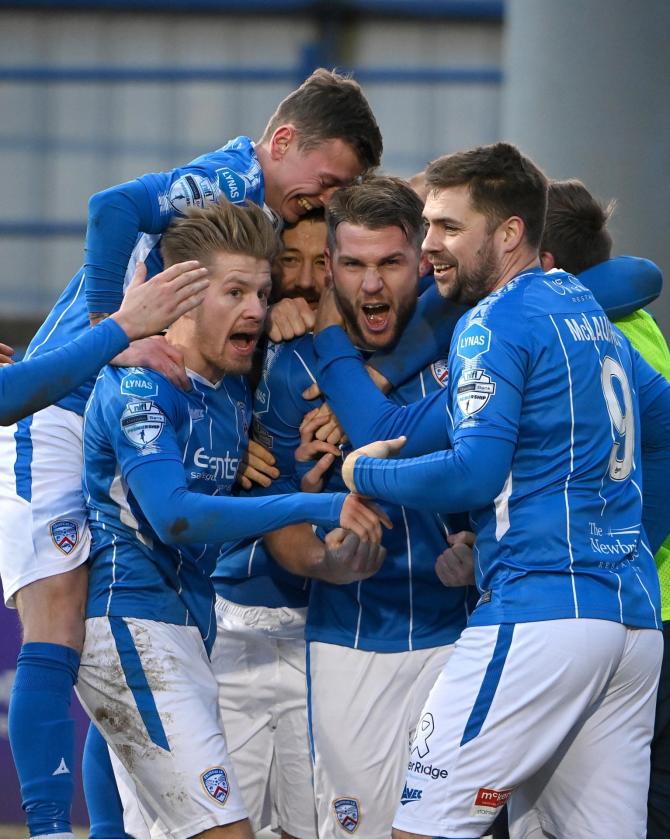 Stephen Lowry is mobbed by his team-mates after scoring a late winner in the previous meeting between the sides at Coleraine back in January.

COLERAINE have the chance to close to within two points of league leaders when they host Crusaders in the Friday night game on BBC NI.

The Bannsiders, unbeaten in their last 14 games, are currently five points behind the Blues, but with a game in hand.

Should they win this evening they will turn the spotlight back on David Healy's side who host Carrick Rangers on Saturday afternoon.

Standing in their way are old foes, Crusaders, who have enjoyed a mixed run of form recently but who remain third in the table.

They have won three and lost two of their last five games and responded well to last Saturday's home defeat by Warrenpoint Town by beating Carrick 3-1 in midweek.

The sides have met twice already this season with a win for either on their own patch.

A solitary Jordan Owens goal was enough to win the three points at Seaview in the first meeting towards the end of last year while a late Stephen Lowry won the day at Ballycastle Road back in January.

The midfielder, on as a sub' for the injured Stephen O'Donnell, got on the end of a Jamie Glackin free-kick to score two minutes from full-time.

Earlier, Curtis Allen scored his first goal in his second spell at the Showgrounds to cancel out a bizarre Jamie McGonigle opener for the visitors.

There was little between the teams that day, despite Crusaders' manager Stephen Baxter's assertion that he believed his side had done enough to win, and a similarly close contest can be expected this evening.

Oran Kearney is getting a fine tune out of his players whatever team he picks and he faces a possible selection dilemma this evening.

He hinted following the win over Dungannon that injured defender Aaron Traynor and striker James McLaughlin may be fit to return to the matchday squad.

One of the Ballymoney man's great skills this season has been rotating his squad, picking the right players and system for individual opponents.

He will need to display that astuteness again tonight against a Crusaders team which has added former Dungannon Swifts manager and Linfield coach to its backroom staff.

The move has been largely welcomed by Crues' supporters but appears a strange appointment so deep into the season.

What does his appointment tell us about Crusaders? Does Murphy's arrival hint at a tweak in tactics and playing style from the north Belfast side? Or is that reading too much into it?

Crusaders have built their recent success on a well developed and very effective style of football; it's no secret that their preferred tactic is to go long to Jordan Owens and work from there.

However, with the big striker being used more sparingly in recent weeks, tonight's visitors are perhaps looking at different ways of utilising the large squad they have.

Given the depth of talent both clubs possess, tonight's game promises to be a fascinating affair with the tactical battle played out on the sidelines as compelling as what happens on the pitch.

It's a difficult game to call, as it always is when these two teams meet.

Coleraine haven't reached any great heights in recent weeks in terms of performance, yet they have got the job done on each occasion.

It's a trait that has been built up over a number of years and sustained by a hardcore of experienced campaigners such as skipper Stephen O'Donnell, fellow defender Aaron Canning, the outstanding Stephen Lowry, the versatile Josh Carson and the wily Eoin Bradley. I could go on.

Matchwinner Stephen Lowry admitted after his heroics in the January clash at Coleraine that the manner of the win was what Crusaders tended to do to opponents, including Coleraine.

It's that ability to eke out wins while not playing at your best that made Crusaders such a formidable force for so long and which Coleraine are demonstrating so expertly this season.

It's for that reason that I fully expect Coleraine to get the job done this evening and keep the pressure on the one team above them in the league table.