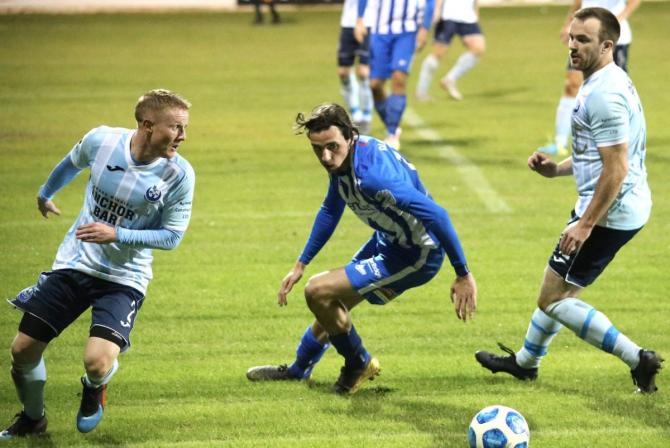 Coleraine and Portstewart, seen here in the Eventsec North West Cup back in September, in Irish Cup action on Tuesday.

PORTSTEWART manager Johnny Law admits he and his players are expecting an extremely tough evening when they visit Cliftonville in the Sadlers Peaky Blinders Irish Cup on Tuesday night.

Law, whose team hasn't played a competitive game since losing to Coleraine in the Eventsec North West Cup back in September, has had his players fulfill a number of friendlies in the lead-up to the Solitude trip.

They have played the likes of Ballinamallard Utd and Coleraine in an effort to get the players up to speed following months of inactivity.

Indeed, it was only recently that clubs such as Portstewart got the green light from the NI Executive to resume group training - hardly ideal preparation for taking on one of the Danske Bank Premiership's in-form teams.

"To be honest, the result of the Cliftonville game is nearly irrelevant," admitted Law, "as we are just delighted to be back playing.

"But the players made the decision, they wanted to get back to playing.

"Of course it’s been frustrating but we’re delighted now that we can look forward to a competitive game after so long.

"The players are excited about the game and hopefully we can go and give a good account of ourselves against one of the best sides in the Irish League.

“We've played a number of friendlies but it’s been tough as we are carrying a number of injuries at the moment which has impacted on our preparations," he added.

Law can call on plenty of experience for the trip to north Belfast with many of the Portstewart team having experience of playing with neighbouring Coleraine in the past.

And while no-one is expecting anything other than a handsome Cliftonville win on Tuesday, Portstewart will be determined to show that they were correct in the club's decision to fulfill their Irish Cup commitments, unlike a number of other clubs who withdrew from the competition.

“Whatever happens against Cliftonville, we’re going to keep training as we will be running the Dr Theo Laverty Cup in the summer," said Johnny, who celebrated his 50th birthday last weekend.

"We hope to have 16 teams taking part so everyone at the club looking forward to that before the new season kicks off, hopefully, in August."

Good luck to everyone at Portstewart...