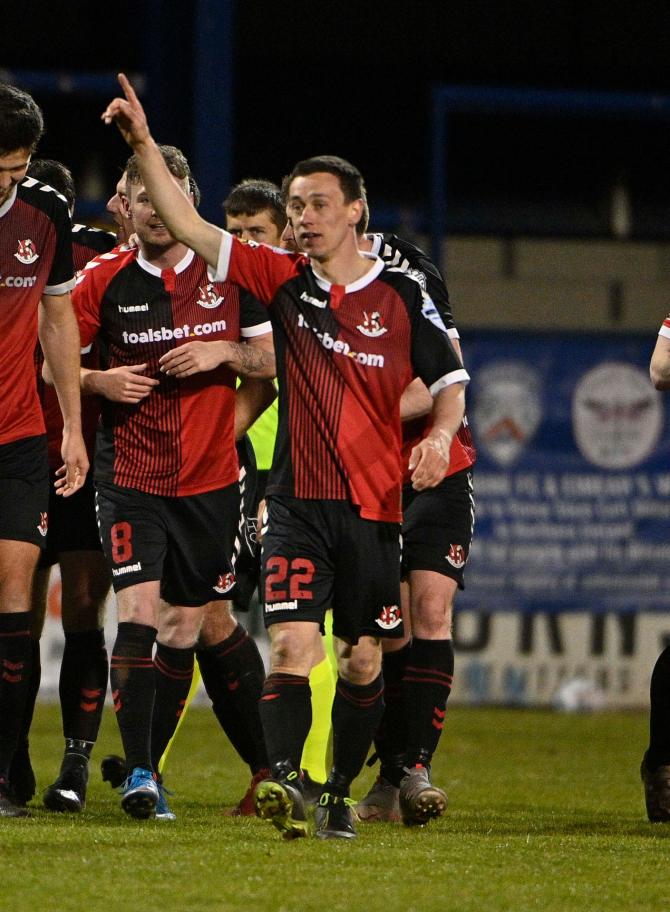 COLERAINE crashed out of the Sadlers Peaky Blinders Irish Cup in the first round on Tuesday night, undone by a wonder strike from Crusaders winger Paul Heatley.

There appeared to be little on when the ball broke to him, unmarked, around 35 yards from goal in the 85th minute.

However, not for the first time in his career, the diminutive wingman, who had been well marshalled up to that point, produced something special when it mattered most.

He let fly with a superbly hit volley which dipped over Coleraine keeper Marty Gallagher and into the roof of the net for what provced to be the only goal of the game.

In truth, this contest between two of the Danske Bank Premiership heavyweights was always likely to be decided in this fashion.

While the visitors dominated in terms of possession and chances created, neither goalkeeper had much to do for large periods of the match.

Indeed, the hosts failed to force a save out of visiting keeper Sean O'Neill over the 90 minutes, a couple of efforts going wide of the target in the latter stages.

Crusaders fared slightly better. They had one shot on target in the opening 45 minutes but improved after the break, forcing Gallagher into a number of smart saves prior to the breakthrough.

They also pressed their hosts back, forcing nine corners in the opening half, as they went in search of the opening goal and maintained their dominance after the break.

It proved a disappointing and dispiriting night for Oran Kearney's men who struggled to break down a resolute Crusaders rearguard.

They must now regroup and go again in the league this Saturday when they entertain free-scoring Cliftonville in the first of five post split games.

The Reds warmed up for the weekend game with a 5-1 victory over Portstewart in their Irish Cup tie at Solitude, also on Tuesday night.

The hosts raced into a 2-0 lead inside eight minutes thanks to a Garry Breen header and Daire O'Connor's well-struck shot from 20 yards.

Cliftonville were given a brief scare just after the hour when Richard Vauls pulled a goal back for the Seahawks but the Premiership side responded strongly with O'Connor's second goal swiftly followed by strikes from Daniel Kearns and Ryan Curran.

A win for Coleraine on Saturday will go some way to easing the disappointment of this Irish Cup defeat and maintain their push for one of the two automatic European places available.